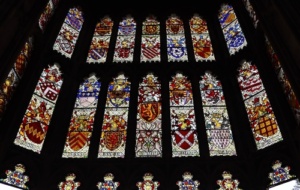 Dr Stephen Byrne (1983, DPhil Philosophy) recently worked on the restoration and repainting of the eighteen heraldic windows and nine tops that make up Pugin’s lost masterpiece in the great dining hall at Alton Towers. They were installed in September.

Stephen worked in the City as a business analyst until 2000, before retraining with a four-year stained glass apprenticeship under David Williams at the John Hardman Studio between 1999 and 2003. They then set up their own studio in 2004: Williams & Byrne (Stanton Lacy, Ludlow). 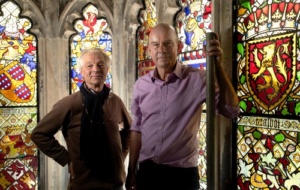 At Hardman’s, Stephen worked with David on eight windows for Saint Stephen’s Hall in the Palace of Westminster and on two full-sized facsimiles of Victorian windows: the magnificent east window from the Church of the Immaculate Conception in Farm Street, Mayfair, and the equally glorious east window from Saint John the Divine, New York.

You are all warmly invited…

We are delighted to introduce…