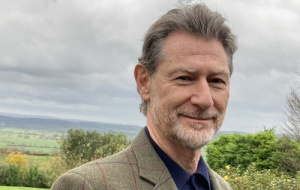 Stephen Moss (1975, Experimental Psychology) has had a varied career, working in social work for over 12 years before moving into management consultancy. He now leads the consultancy firm Greener Moss. Stephen recently stepped down as a trustee/volunteer with A Band of Brothers, a charity working with young male offenders, after 9 years. He is also a trustee for Immediate Theatre, a community-based youth theatre charity.

How did you come to Univ?
I went to a suburban grammar school and developed an interest in psychology – I became a very young Samaritan volunteer age 17 and spent my gap year working in homes for children and teenagers in care of the LB Brent, coming up to Univ in 1975 to study Experimental Psychology with Jeffrey Gray.

Is is there a common thread that has shaped your career from social work to consultant?
The common thread has been an interest in how human social systems work. After Univ I worked in residential social work and completed an MA in Applied Social Studies (social work) at Warwick, where I also qualified as a social worker. I then managed a 12 place hostel for young single homeless people at Centrepoint before going to LB Ealing to manage two adolescent units for 21 young people in care in two houses. This was very formative and, for a 26 year old, a very challenging period. However, I learned a lot about psychological approaches to groups and organisations from a brilliant mentor-manager.

I went from there to LB Lambeth when “Red” Ted Knight was Leader and in major conflict with the Thatcher Government over poll tax. I set up and led a community mental health resettlement service. Here I was able to work more across the wider system of services and at the point where policy and operations meet. Whilst there I studied for two years at the Tavistock Clinic in organisation consulting and this led to a deep interest in systems thinking and social systems in and between organisations impacting on performance and outcomes, as well as deepening my practice for working psychologically with groups.

The politics of the time played out and a “restructuring” of services led me to believe that none of these reorganisation activities made any difference to vulnerable citizens in need of support and service. A great deal of time and cost goes into reorganisations as well as expert effort – and I see these as a failure to work with the anxiety that society holds about supporting vulnerable or traumatised people. These days, I find I am working with organisation design and development even more with the human system and psychology very much in mind.

I went over to the “other side” – the then still evolving profession of management consultancy, joining PA Consulting in 1987 and then a pioneering “change management” consultancy called Kinsley Lord. With a human system approach incorporated in to both the “what’ and the “how” of consulting, I have worked for a number of consulting firms including Logica and Deloitte, supporting the “people side” of transformational and technology change – in public services, financial services and more recently in the charity sector. I have had periods also, of working collaboratively with others through my own business, especially since 2011, and now I am working mainly in public services leadership development to deliver system change in health and social care, for example. I do get to do other work in other sectors supporting strategy away days for senior teams and recently was able to co-design and facilitate (with my Arabic speaking friend Philippa Neave), a highly interactive, workshop-based conference for seventy Middle East pro-democracy activists through the Oslo Freedom Forum. It was a great honour to witness their struggle and to provide an experience in which they could work together in a psychologically safe way.

In recent years, my wife and I have set up a non-profit social theatre company (Reveal Productions) that works with individuals and communities to create “shows with meaning”. She is the practitioner, but I do all the grant applications and management. I do get to support the projects we do, which is the fun part for me as I can be creative and also see the work evolve into creative expressions of people’s stories and see significant community issues being aired and shared through the medium of theatre where people live. I’m also a trustee of Immediate Theatre – a Hackney (London) based charity reaching vulnerable young people and now also older people – through theatre.

In the 1990s as part of a consulting project, I actually interviewed Baroness Amos when she was Head of the Equal Opportunities Commission. I also, some years ago facilitated the strategy for the University of Oxford Development Office.

Have you faced any challenges in your life that you are happy to share here? How did you cope with the challenge in question?
Probably the most challenging work experience was heading up two therapeutic homes for young people in care at 26 years old (1982-4). The young people themselves had experienced trauma and exclusion and all that brought – but also the staff were undertrained, demoralised, anxious and often inappropriate. I learned a lot about working therapeutically and how the organisation needs to align around the therapeutic principles. I had to learn about ‘holding the space’ by exercising positive authority and managing boundaries, I developed considerable resilience and self-knowledge. I developed effective teams (letting people go was part of that) and most important, learned how to make the young people the centre of what we do. However, it is difficult to give love to these young people in that kind of institutional setting, which let’s face it, is what they need. The experience of young people in care is even now, in need of a radical improvement. I coped because I had a supportive wife and a very wise and supportive manager-mentor. I’m also tenacious and committed, see the big picture in what I do as well as the detail, value people and am able to bring out the best in others – these were important to me then and still are now!

How do you relax?
As you may have guessed we find theatre and performance interesting and full of possibilities. I walk and run with my dog in the hills and on the “levels” of Somerset. Meditation and quiet time also is good for relaxing and necessary, especially as I am a lifelong supporter of Tottenham Hotspur – a Premier League soccer team prone to producing very tense matches… I have two small grandchildren now to give my attention to.

Do you have any advice for Univ students, especially considering the current situation?
Make an effort to stay connected to fellow students and support each other. Value your good qualities and abilities and those of other people you know. See the current reality as an opportunity, if you can, to learn about yourself and society, to develop yourself.

Do you have any favourite Univ moments?
Being part of the Rugby Cuppers-winning squad was a lot of fun, especially being in the same team as the MacDonald brothers (rather than playing against them) – both were current international players for S Africa and Scotland

For Univ’s 750th anniversary celebrations (Lord Butler was Master then) – there was a great series of events with Tony Blair, Rupert Murdoch, Richard Branson and Stephen Hawking giving speeches.