Order of the Garter Investiture 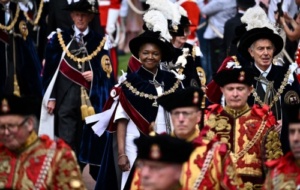 University College Oxford is delighted to welcome its Master Valerie Amos’ Investiture and Installation to the Order of the Garter, at a ceremony in Windsor Castle followed by a service in St George’s Chapel, on Monday 13 June 2022. Baroness Amos’s Investiture and Installation make history, as she is the first black person to be appointed to the Order.

The Order of the Garter is the oldest and most senior Order of Chivalry in Britain, established by King Edward III nearly 700 years ago. The Order includes The Queen, who is Sovereign of the Garter, several senior Members of the Royal Family, and twenty-four Knights or Ladies chosen in recognition of their work. Knights of the Garter are chosen personally by the Sovereign to honour those who have held public office, who have contributed in a particular way to national life or who have served the Sovereign personally.

Currently Master of University College Oxford and a Companion of Honour, Baroness Amos has had an illustrious career of public service. She was the first ever black woman cabinet minister serving as the Secretary of State for International Development, Lord President of the Council and Leader of the House of Lords (2003-2007). Baroness Amos went on to serve as British High Commissioner to Australia (2009-2010) Undersecretary General for Humanitarian Affairs and Emergency Relief Co-ordinator, UN (2010-2015), and later as the Director of SOAS (2015-2020). She began her career in local government and went on to become Chief Executive, Equal Opportunities Commission (1989-1994).

Speaking prior to the service, Baroness Amos said, “It is a huge privilege to be appointed a lady companion of the Garter by Her Majesty the Queen. I know my parents would have been extremely proud and it is to them and the countless others who have journeyed here from other places, worked hard and have made this country home, that I am thinking of today. I am overwhelmed with gratitude.”

Master appointed to the Order of the Garter

On behalf of the entire College…

The Master in conversation