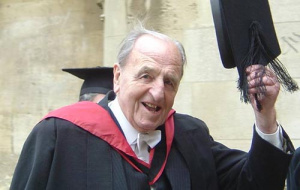 George Cawkwell, who has died at the age of 99, was a central figure of the college for over 69 years. No longer-serving Fellow is known in the college’s history – and “serving”, indeed, is the right word, even for the many years after his formal retirement in 1987, helping for some years with teaching and fund-raising, entertaining old members at home or in college, dining and chatting at Sunday High Tables, inviting to his home undergraduates he had met at Classics dinners, and indefatigably attending every Gaudy and remembering the most disconcerting details of one’s undergraduate past. “And how is George?” was so often the first question a returning Univ man or woman asked, and the answer was always “the same as ever”, with a mind and personality that retained all their liveliness and vigour. The last time I talked to him was a couple of days before his death, when he rang to express sympathy over an illness of my wife. It was a similarly typical act of kindness that caused the accident that clouded his final six months: he had just been next door to leave a congratulatory note on the examination results of a teenage neighbour, and slipped on his own doorstep as he returned. It was also somehow characteristic that the passing motorist who came to help “turned out to be the daughter of someone I’d played cricket with”. 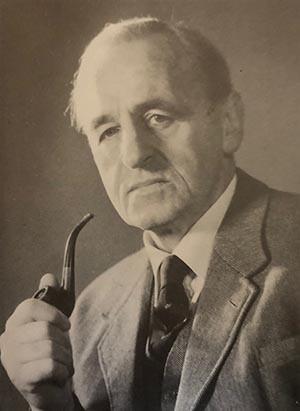 He was born on 25 October 1919. When his father was a young man he had started a chemist’s shop in Auckland which provided enough money for him to “go home” to Edinburgh to study medicine, and that was where he and George’s mother met. She went out to New Zealand in 1912, but she remained very Scottish and George felt that she never really took to her new home. Her deep religious conviction affected his upbringing: his familiarity with Anglican hymns – he sang in the parish choir – could sometimes be sensed in George’s diction, especially when he reached for an epigrammatic conclusion in lecture or in writing.

At King’s College Auckland he certainly made his mark: two years in the first rugby XV, three in the first cricket XI, Company Sergeant Major of the Cadet Corps, and Head Boy. At the same time Patricia Clarke was Head Girl of nearby Diocesan College, though they did not meet until both were students at Auckland University. Their courtship was interrupted by the war, where George saw action – oddly, with the Fijian Infantry – in the Solomons in 1944, but they married in 1945. A year later they came to Oxford, as George won a Rhodes Scholarship to Christ Church, where, married man though he was, he was expected to stay in College. On the first night their eldest son, Simon, was born: the porter who brought that message the next morning must already have realised that this was not going to be a run-of-the-mill freshman. He went on to take a first in Greats in Michaelmas 1948. 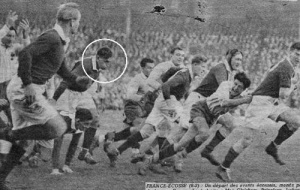 While an undergraduate he also won two rugby blues, the first only two months after his arrival. In the dressing room at Twickenham he was asked which nation he would like to be considered for: he said “Scotland”, and on New Year’s Day 1947 he duly played against France in Paris. France won 8–3, and all those playing south of the Border were immediately dropped. “I suppose,” he later wrote, “I was a moderately good player, but the truth is that my heart was never really in it and I can remember reciting Greek verbs as I jogged around the field.” What he would really have liked to excel in was cricket: “I hit some big sixes”. In a lunch for his ninetieth birthday in 2009 he recalled, in inimitable style, “all those I played sport with, so much fitter and healthier than I was. All now gone or going.” An interview with him as Scotland’s oldest living rugby international appeared in 2015, together with a rare picture of that 1947 match in Paris.

He came to Univ as Ancient History Fellow in Michaelmas 1949. George always greatly liked and enjoyed the company of students, both in tutorials and socially, and he felt that he got on better with them the older he got. That extended some way beyond his own pupils: his two dining clubs, the G.L.C. and the Bentham, and his brooding presence on the touchline during college matches were just two of the ways that he came to know many others. He also went out of their way to meet and ease the path of incoming graduate students, still a rare breed in George’s early days: they understood the isolation that newcomers, especially from abroad, could easily feel, and many will remember the kindness and sympathy that he offered. Two college awards reflect those particular interests, the Cawkwell Prize for the Classics undergraduate “who makes the greatest contribution to the general life of the college” and the Cawkwell Scholarships for postgraduate study in Classics. 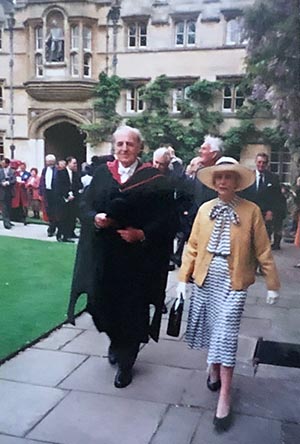 He and Pat – they were very much a team – also entertained lavishly at home, with Pat keeping a meticulous diary of exactly who had come and what they had been served. It was always a delightful home to visit, and Pat bore with resignation the oddities that were features of academic married life: George even had to live in college for his first year or so as a Fellow, by which time the family had grown to include Sarah and Tim as well. The marriage remained such a close and happy one that it radiated pleasure to all that knew them, and it was a devastating loss when Pat died in 2008.

Among his first pupils were two formidable scholars, Ernst Badian and Raphael Sealey: as he later said, being exposed to “the world premiere of some entirely original view” from one or other at 9 o’clock every Friday was ‘quite exhausting’, but those sessions were remembered with great gratitude by the recipients. He decided to specialise in the fourth-century Greek history option, and swiftly made it his own, with a lecturing style that was unusually sympathetic to undergraduate needs, not least in such little things as repeating all references and offering hand-outs: these were the early years of photocopying, and I still remember the smell of formaldehyde that the flimsy sheets gave off. Thirty minutes from the start there would always be a break, with a firm “pens down”: nobody, he felt, could be expected to concentrate properly for a full hour. An academic anecdote would be told, or possibly the battle of Leuctra would be fought again on the lectern, with a pile of Oxford texts to represent one side and Loebs the other. The Oxford texts always won. And, typically of George, the lectures offered a terrific synoptic feel of how the whole period ticked, not just the details of this Peace or that Peace or what Agesilaus was up to, but why it all made a sort of sense and why it mattered – that grand sweep of the period, the historian’s feel as well as the puzzle-solver’s.

Publications began in 1956, again concentrating at first on the fourth century: several became staples of reading lists, as again I remember from my own undergraduate experience in the late sixties. They were so important that the other faculty fourth-century expert, Geoffrey de Ste Croix of New College, felt moved to write rejoinders to circulate among his own students. George of course knew – a pupil reported this, adding “I didn’t think dons behaved like that to each other” – but was too urbane to reply in kind; a few scores though were settled in footnotes in his later books. The first book, Philip of Macedon, appeared in 1978; immersion in college business – he was successively Senior Treasurer, Librarian, Dean of Graduates, Senior Tutor, Dean of Degrees, Steward of Common Room, Procurator, and eventually Vice-Master at a time when that office was particularly burdensome – meant that the others had to wait till retirement. By then a Festschrift had also appeared to mark his seventieth birthday (Georgica: Greek Studies in Honour of George Cawkwell, edited by Michael Flower and Mark Toher, 1991): that began with a warm assessment by Simon Hornblower of George’s scholarship (“priceless”… “innovative and deeply original”… “original and important”), which ended by emphasising the link between the teaching and the writing: “the savour of George’s writing is the savour which can be added only by the born pedagogue”. 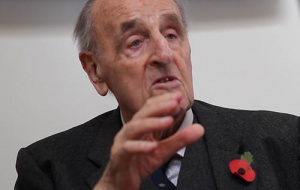 There was plenty still to come. In the later books the focus shifted back to the fifth century. Thucydides and the Peloponnesian War was published in 1997, and won the Runciman Prize; The Greek Wars followed in 2005 – a telling title, appropriate to his project of exploring what are usually called “the Persian Wars” from the eastern viewpoint. Then in 2011 Oxford University Press published a collection of his most important articles as Cyrene to Chaeronea: an important role in encouraging that book and seeing it through to completion was played by Lisa Kallet, his successor at Univ and the holder of what is now fittingly named the Cawkwell fellowship, funded by old members in George’s honour.

As one reads the books, it is impossible not to hear George’s living voice: “Pausanias’ inactivity was very far from masterly”; Darius “would do nothing common or mean” (poetic quotation or half-quotation was hallmark); translating a phrase of Herodotus, at the Persian court “there were many chaps, few real men”. There is a taste for the bold and, in his own word, the “wicked” opinion: there was never any need for Persia to fight the battles of Salamis or Plataea; there never was an Isthmus Wall in 479; the Greeks owed their deliverance to anyone but themselves. Many years of tutorial teaching leave their mark. One chapter of The Greek Wars for instance goes through all the possible explanations why Persian rule should have been so resented, and makes devastating criticisms of each in turn, just as so many students had been put on the spot if they had dared to present any of those views. Equally searching questions are put to the narratives that the ancient authors offered, and most fall short: “One wonders indeed whether Herodotus himself had any experience of war.” “All in all, Ctesias remains a great disappointment.” “Xenophon is, in a word, muddled.” “All he [Isocrates] can offer is a spectacle of Panhellenic folly.” Even Thucydides does not escape unscathed, especially on military matters. One can almost feel each in turn writhing in embarrassment on the tutorial sofa. 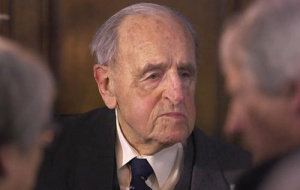 My own memories of George are of course many, from the first words he said to me when I arrived late for a revision session (to be fair, Kybald House was not easy to find): “those who come late don’t get any madeira”, and he poured the glass back into the bottle – the start of a beautiful friendship. He rang me a few hours after my fellowship interview with a brief, faux-gruff “you are successful”; for thirteen years we were tutorial colleagues, thoroughly amicable ones; for nearly fifty we have enjoyed conversations about rugby, Thucydides, and generally the way of the world, and by now the madeira or the burgundy did not stay in the bottle. I will miss him terribly.

George’s sixty-nine years are not a large fraction of Univ’s 750 and more, but they are not a small fraction either, and it is hard to think that any fellow in that history has been remembered with such affection by so many.