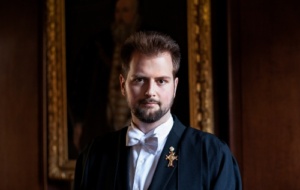 Stefan receiving the Order of the Holy Brâncoveanu Martyrs

Stefan Dascalu (2018, DPhil Bioscience – Interdisciplinary Bioscience (BBSRC DTP)) has been awarded a Knighthood to the National Order of Cultural Merit (Section H – Scientific Research) from the President of Romania for public health work. Stefan will receive the medal at a ceremony at the London embassy later this year.

Stefan’s DPhil project looks at the immune response to avian influenza infections in poultry but since the beginning of the pandemic, he has devoted much of his spare time to doing research and raising awareness, particularly in his home country of Romania. In recognition of this work, he was awarded the BBSRC / Oxford Interdisciplinary Bioscience Social Impact Award.

From early 2020, Stefan regularly appeared on Romanian national television and radio offering accessible scientific expertise. He also participated in a series of live online broadcasts in the UK, providing information about SARS-CoV-2 infection and the immune system and addressing the public’s concerns.

Since December 2020, Stefan has helped the Romanian vaccination campaign, focusing on increasing public trust. He coordinated an academic paper, co-authored with prominent figures in Romanian public health, which highlighted the main challenges of vaccine implementation in Romania and provided a set of recommendations. The paper was featured on the official website of the Ministry of Health.

Stefan reviewed Romania’s initial pandemic response, providing the international research community with comprehensive reference work. He was the keynote speaker at conferences including the National Conference of General Practitioners, the Romanian Healthcare Communication Forum and the largest Romanian annual conference on vaccination and disease prevention. His academic contribution led to him being invited to join international academic and professional networks aimed at improving public health in Romania and to also become a Fellow of the Romanian Society for Epidemiology.

Stefan also worked with religious institutions and church officials in Romania to increase public compliance with the official COVID-19 guidelines and tackle vaccine hesitancy. He appeared on the Romanian Orthodox Church’s official television station, discussing vaccination and its benefits. He was also invited to become an associate expert for FoRB Romania, an interdisciplinary community focused on topics related to freedom of religion and belief. Based on these experiences, Stefan wrote an article on the involvement of religious institutions during public health crises.

Earlier this year, Stefan Dascalu was awarded the Order of the Holy Brâncoveanu Martyrs – one of the highest distinctions of the Romanian Orthodox Church – from His Beatitude Patriarch Daniel, for his public health activities in Romania and the UK during the COVID-19 pandemic.

You can read more about Stefan’s work during the pandemic here.

Univ will be appearing…

Order of the Holy Brâncoveanu Martyrs

On the day that the World Health…