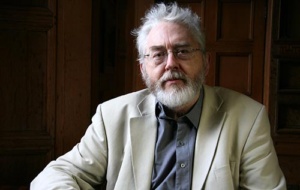 At the end of Michaelmas Term 2011 Dr Mike Nicholson laid down his posts as Tutor in Russian and as Dean of Univ. He actually retired as a Fellow in the summer of 2010, but continued in his College duties until his successors were ready to take over. Mike had originally studied Russian and German at Manchester University, where he got a First in 1967. He then came to Brasenose, where he completed his D. Phil. on Aleksandr Solzhenitsyn, an author who would play a large role in his future scholarly life, and the Russian literary tradition. After spending some time at Essex, he moved to Lancaster, where he taught for ten years, and in 1981 became Head of the Department of Russian and Soviet Studies there. After the abolition of this department, Mike moved to St. Cross College in Oxford as Fellow and became University Lecturer in Russian. In 1987 Mike moved once more, when he was elected to succeed Tony Stokes as Univ’s Fellow and Praelector in Russian.

More will be said about Mike’s academic achievements below, but in addition to this he made a great contribution to the running of the College, so that he became a familiar face to many Univ students over two decades. He served as Senior Tutor in 1989-93 and 1999-2000, and supported Clare Drury during her final illness in 2004/5; he was also Dean of Graduates in 2002; and he served as Dean almost continuously from October 2006 until his retirement. Even then he remained closely involved in College life, acting as Dean of Degrees from 2014 until his death. We owe him a great deal, and he will be much missed.

At the time of Mike’s retirement, Professor Alex Wöll, Lecturer in Czech Studies at Univ in 2007-9, and now Professor of Central and Eastern European literatures and cultures at the University of Potsdam, wrote a tribute to him which appeared in the 2011 issue of the Record. Professor Wöll has very kindly let us reprint this tribute for the website, adding some further memories and reflections of his own:

When I first met Mike Nicholson at my Univ job interview, from the beginning I got the impression that I was now in the magic circle of Gandalf himself. At once I remembered that old connection between Allgäu Alps and Oxford: Tolkien had modelled his figure on an art postcard. The title of this card was “Der Berggeist” (“the mountain spirit”): it was published at Ackermanns, and painted by Josef Madlener. Tolkien had that Leader of the Fellowship of the Ring always on his writing table. I was delighted: this last of the wizards with his white beard and his red magic gown was Dean at Univ! Quite like Gandalf and the Black Riders, he always had to fight with his students to solve their problems from accommodation to discipline. Whenever they heard that he was in charge to help them, or that he would supervise a party, one could hear a delirium of joy through the quads. According to the best traditions students for him were at the centre of College life; every term he invited all of his current tutees, together with some former students, to West End Farm, his own castle in the Old English countryside. Barbara cooked plenty of good food, while Mike offered his new travel collections from Chinese schnapps with pickled snakes to dried frogs’ legs.

From his gleaming eyes one understood how mundane everyday life was transformed by his fascination for the Gothic in all forms, enchanting and banishing all sad thoughts, grief, and boredom. In College he was famous for his Rasputin performance: when he started to talk about Prince Felix Yusupov, that member of an old Tatar family who studied Forestry and English, a strange subject combination only allowed for him personally at Univ, the scenery of Old Tsarist Russia rose in front of the audience again. Felix lived in the meeting room on the ground floor of Staircase VI, and after his studies shot in Saint Petersburg, Grigori Rasputin, the faith healer who was said to have influenced the decisions of the Tsar. Before Univ Felix led a flamboyant life, spent a lot of time with Gypsies and adopted female clothing; at Univ he became a member of the Bullingdon Club and established the Oxford University Russian Society.

The gypsy theme leads to another aspect of Mike’s College life: his guitar playing. From old Spanish gypsy elegies to the Beatles he rolled the Spanish “r’s”and “th’s” to his guitar. “Those who have heard Mike Nicholson sing will not need me to tell them what a delightful experience that is. When Mike sings a song it stays sung—and you won’t forget it”, said Bob Copper about Mike’s musical double life, and after some Music Society Evenings in the Master’s Lodgings it was always that same impression.

Another of his passions has been the calligraphic painting of modern Chinese language signs. At some meetings you could see him in his chair, writing with passion, and at a closer look it emerged he was learning new signs. This work became more and more successful. He even gave lectures about the Chinese dimension of Russian émigré culture at Henan University in Kaifeng, where he was an Honorary Professor.

Personally I’ve never understood how one of the most humorous persons, with an open heart and such charm, could write during his entire professional life about Russian literature from the Gulag. Perhaps only by this contrast to your own reality are you able to analyze the darkest sides of existence. He was one of the best known critics of Aleksandr Solzhenitsyn and Varlam Shalamov, with a wide range of publications on their novels and essays. Some years ago he was invited as a personal guest to Solzhenitsyn’s house in Moscow where he received hitherto entirely unknown writings of the young author. Mike was one of Solzhenitsyn’s last visitors, and a guest of honour at his funeral.

At Univ Mike taught the full range of modern Russian literature and published widely on other topics as well. Due to his experience, his commitment, and his brilliant reputation he always got the most distinguished students with whom he formed a worldwide network. Most of them come back regularly to visit their “old” master. Mike’s excellent work convinced a former Univ student, Tom Schrecker, to make a generous endowment in support of Mike’s post. The new Schrecker-Barbour Fellowship in Slavonic and East European Studies crowned Mike’s professional commitment to the College and saved Modern Languages at Univ for the future. Even a second Fellowship for Czech and Slovak could be established at Univ by his work.

After my own time at Univ my car had rusted in Mike’s garden under the trees; Barbara planted flowers inside, bushes had grown over the roof. Until today I have no idea how I managed to move it. After his retirement Mike started to visit his former students all over the world. He joined my inauguration ceremony and talk as Vice-Chancellor of European University Viadrina at Frankfurt in 2015 where I could publicly thank him for all the good he had done for me. In 2020 we consulted about Emil Krebs, who could fluently speak 68 languages; Mike even joint the official opening of the exhibition at German Foreign Office in Berlin. We’ve exchanged emails about Adam von Trott zu Solz who was one of the Rhodes Scholars at Balliol College and conspired together with Claus von Stauffenberg and Fritz-Dietlof von der Schulenburg in the 20 July plot of 1944 to assassinate Hitler. In the spirit of all what I’ve learnt from Mike about the “Oxford spirit” and in the context of today’s Russian war against Ukraine, I’ve given my talk on 20th of July this year at the official memorial ceremony on top of the hill near his family estate at Imshausen. Being still external examiner for Czech and Slovak I’ve lived then at West End Farm in Aston visiting Barbara and Mike personally again after the longer Corona time break. He showed me his new (and now last) article by the title “Discontinuities in the Evolution of Kolyma Stories and ‘One Day in the Life of Ivan Denisovych’”. Like always I’ve been overwhelmed by his witness und humour. Mike was the best colleague I’ve ever had. His outstanding character, sense of duty, helpfulness, and humanity will always be and remain role models for me. All the very best for your last journey, great friend.

Further tributes to, and memories of, Mike from the wider Univ family will be published online in due course. Mike’s colleague, Professor Polly Jones, will be collating these and those that wish add their own recollections may contact her via email: Polly.Jones@univ.ox.ac.uk

The funeral service for Dr Mike Nicholson will take place in the College Chapel at 2 O’Clock on Wednesday 21 September 2022.  The family would like to invite all of Mike’s former colleagues and friends to join them at the service and afterwards in Hall.

A livestream of the service will be provided via this link.

The College expects to make available a recording of the service at a later date, so that anyone who is unable to attend in person or watch online is able to listen.