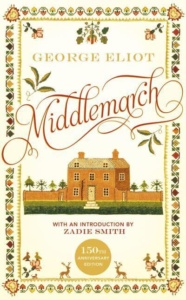 Have you ever ploughed your way through a book, struggling with its length, unsure of the author’s point, and desperately wishing something exciting would happen? Me too. And the book was called Middlemarch.

If this doesn’t sound like a promising review, please hear me out…

Middlemarch was written and published in 1871, by George Eliot (real name: Mary Ann Evans), and it’s now one of my favourite books. The novel has no clear protagonist, Eliot switches the focus between various characters: A young woman with dreams of helping the poor; a doctor with ambitions of becoming celebrated in his field; a middle-aged banker, protective of his wealth; a reverend who delights in the study of nature. Characters get engaged, married, deal with financial problems, and sometimes simply go about their lives like ensemble members, watching slightly more interesting things happen to their neighbours.

I knew that, in 1871 (and in the 1830s, when Middlemarch is set), the UK was in the thick of the Industrial Revolution. The wealthy were inventing and producing at the speed of light, whilst the working classes lived in abject poverty. There was mass pursuit of progress; technological, intellectual, and moral, at the expense of human life.

So, I couldn’t understand why Eliot was telling such “boring” stories. Why didn’t her characters seem to be going anywhere? Nobody suffered in workhouses, nobody was a filthy-rich business-owner. The stories weren’t following the trajectory I recognised from other novels: a rising problem, a chaotic climax, a restoration of order. Instead, the characters lived “irregularly”, like they were making decisions Eliot wasn’t controlling. Like Eliot, too, was just an observer, with no authorial power.

Only near the end did the book move me. The doctor and his wife argue, realising their interests will never be mutual, yet they are bound by marriage. The banker is quietly ostracised by the town for a crime he committed decades ago. The young woman ca dreams nnot achieve her altruistic, limited by marriage. I was heartbroken. This was when I understood that Eliot was a realist. She saw it was difficult for most people to achieve progress. She knew not everyone could succeed or be remembered for grand reasons – she, herself, had to disguise her female identity to be published.

Finishing the book, I realised Eliot had slowly made me sympathetic to each character. I’d spent such a long time with them, in such detail, that reading the book had felt unsensational, like everyday life. But now it was over, I knew it was extraordinary precisely because of its truthful presentation of the ordinary.

Middlemarch reminds me that there is value in living an “unremarkable” life, like the ones Eliot observes. The ending celebrates the everyday for what it is. Whilst I can’t capture or explain all the emotions Middlemarch made me feel, in the words of one of its characters, I can strongly recommend the book, and confirm, “…you would have to feel with me, else you would never know.”.