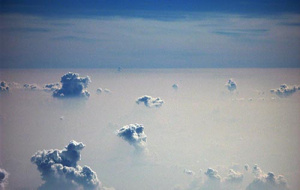 Professor Philip Stier, Supernumerary Fellow in Physics, is the Principal Investigator of a new innovative training network that will train PhD students in machine learning skills to address climate change. iMIRACLI (innovative MachIne leaRning to constrain Aerosol-cloud CLimate Impacts) will bring together leading climate and machine learning scientists across Europe with non-academic partners, such as Amazon and the MetOffice, to educate a new generation of climate data scientists.

The network will use modern satellites, airborne and ground-based instruments along with machine learning techniques to provide greater insight into the role of clouds in the climate system. It is funded by the European Commission and led by the University of Oxford. The project starts in 2020 and will fund 15 PhD students across Europe, with three of them directly supervised at the University. The network also includes the University of Leipzig, Stockholm University, the University of Edinburgh, Universitat de Valencia, University College London, the German Aerospace Center (DLR) and Ecole Polytechnique Fédérale de Lausanne together with the non-academic partners Amazon, The Alan Turing Institute, MetOffice, Iris.ai, GAF AG and FastOpt.

Professor Stier is a Professor of Atmospheric Physics and Head of Atmospheric, Oceanic and Planetary Physics in the Department of Physics at the University. His research examines the effect humans have on physical climate processes and how that contributes to climate change and air pollution. Professor Stier also heads the Climate Processes group and co-teaches fourth year undergraduate lectures on the physics of atmospheres and oceans.

Thank you to everyone who visited…