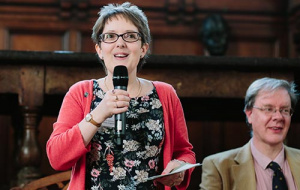 Univ’s Lecturer in Old and Middle English Literature Dr Laura Varnam is currently working on a creative project inspired by the women of the Old English epic Beowulf… and also the dragon!

Laura is a part of the English Faculty’s Fantasy Literature research group and this summer she wrote and recorded a podcast for the Great Writers Inspire series, talking about how the dragon- Beowulf’s third and final opponent- is represented in the original poem and in the work of later creative writers, including JRR Tolkien the new feminist translator of Beowulf Maria Dahvana Headley, and even her own poetry.

Laura has been experimenting with creative writing techniques as part of her teaching of Old and Middle English at Univ and she is currently working on a poetry collection that reimagines Beowulf from the perspective of marginalised characters such as the women, Grendel’s Mother, and even (a creatively reimagined!) female dragon. Laura read her dragon poems as part of the podcast, which can be accessed here.

This summer Laura has had two further poems from the collection published in magazines. ‘Queen Wealhtheow: Cup-bearer’ was published by Ink, Sweat & Tears and her modern version of one of the Old English riddles was published by Green Ink Poetry.

Further poems will be published later in the year and Laura is looking forward to working with the new first year English students on the ways in which creative approaches to medieval texts can spark and inform work in their literary essays.

On Saturday 10 March at the…

The premiere of Daphne…