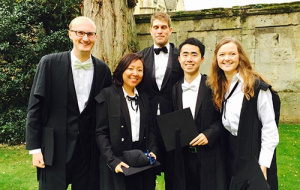 College is deeply saddened to report the sudden death of one of our graduate students, Jonathan Milward, who died at his family home last week.

Jonathan began as a graduate student at Univ in 2016; he received a Master of Science in Theoretical and Computational Chemistry with distinction, and progressed to the DPhil in October 2017. He was awarded an Oxford-Radcliffe Graduate Scholarship and was an outstanding student.

Our thoughts are with Jonathan’s family and with his friends in Oxford and elsewhere.