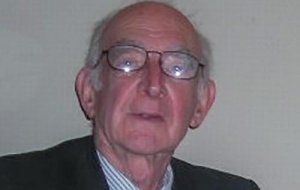 The College deeply regrets to report the death on 2 November 2020 of one of our Emeritus Fellows, Professor Norman March, Coulson Professor of Theoretical Chemistry and Fellow of Univ from 1977-94. He was 93.

Professor March grew up in Leicestershire, before studying at King’s College London as both an undergraduate and postgraduates. He had held posts in Sheffield and Imperial College London before coming to Oxford. He was the first permanent holder of the Coulson Chair, and its title gave him especial pleasure, because Charles Coulson, after whom it was named, had been a great mentor to him. He also received honorary degrees from Gothenburg and Catania. He wrote some 20 books and many articles.

In the 1994 University College Record, our then Master, John Albery, himself of course a notable chemist, marked Professor March’s retirement by praising his scholarship, observing that it was “characterised not by number crunching on the big computer but by elegant and economical theories.” He went on: “Besides being a great scholar, Norman was a good College man. For instance he served on the Tutorial Committee and preached a notable sermon in Chapel on the compatibility of Science and Religion. Above all he is a man of unfailing kindness and courtesy.”