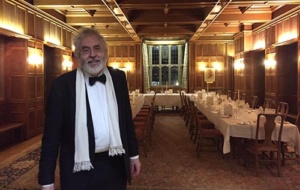 It is with shock and deep regret that the College reports the death of Dr Mike Nicholson, who died suddenly and unexpectedly at home early this morning, aged 79.

Mike came to Univ as Tutorial Fellow and Praelector in Russian in 1987. He formally retired from that role in 2010, but continued to perform his college duties until the end of 2011, when his successors were ready to take over. He served also as Senior Tutor in 1989-93 and 1999-2000, was Dean of Graduates in 2002, Dean 2006-2011, and Dean of Degrees from 2014 until his death. Just last night he was in touch with colleagues here about the Degree Day that will take place tomorrow, on Saturday 10 September.

Mike made a huge and enduring contribution to the College, and we will miss him enormously. Our thoughts are with Barbara and the rest of his family, and all those who mourn Mike’s death as they remember what he means to us and to them.

The College Flag is flying at half-mast on the Radcliffe tower as a mark of respect.

The funeral service for Dr Mike Nicholson will take place in the College Chapel at 2 O’Clock on Wednesday 21 September 2022.  The family would like to invite all of Mike’s former colleagues and friends to join them at the service and afterwards in Hall.