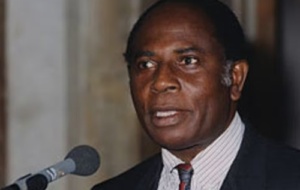 Kwasi Wiredu (1958, B.Phil), often called the greatest living African philosopher, passed away on 5 January 2022. Wiredu is most well-known for advocating for the decolonisation of African philosophy and the Akan concept of personhood.

Before coming up to Univ, he was educated at Adisadel College and the University College of Ghana. He came to Univ in October 1958 to study for a B. Phil. He passed his exams two years later and took his degree in the summer of 1961. At Oxford, Mr Wiredu wrote a thesis titled, “Knowledge, Truth and Reason” supervised by Gilbert Ryle, the world-renowned analytic philosopher.

At Univ, Wiredu’s College tutor was Sir Peter Strawson, former College Lecturer and Tutorial Fellow at Univ who later became the Waynflete Professor of Metaphysical Philosophy. Sir Peter Strawson, who passed away in 2006, once said of Wiredu: “I thought rather fine — reserved and dignified in manner; subtlety and something of profundity in thought.”

A longer obituary will be published in the University College Record later this year.