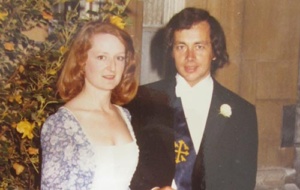 The College deeply regrets to report the death of the Revd. Prebendary David Burgess, our former Chaplain, on Saturday 12 March aged 82. David first came to Univ in 1966 as our Assistant Chaplain, and was then elected a Fellow in 1969. In 1971 he was also elected Domestic Bursar, and he played a major role in overseeing the construction of Stavertonia. He was therefore a central figure in the life of the College in the 1970s, and will have been familiar to many Old Members from that period.

In 1978 he resigned as both Chaplain and Domestic Bursar when he was appointed a Residentiary Canon at St. George’s Chapel Windsor. In 1987 he moved to London where he was appointed Guild Vicar of St. Lawrence Jewry Next Guildhall and a Chaplain to the Queen. In 2002 he was also appointed a Prebendary of St. Paul’s Cathedral. He retired in 2009.

A fuller tribute to David will appear in the 2022 issue of the Record. We send our deep condolences to David’s family.

David’s funeral service will be held at 2.30 pm on Thursday 31 March at St. Mary’s Bourne Street, London. All are welcome.