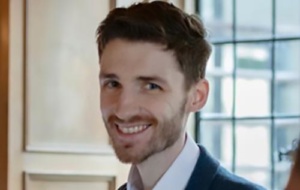 The College community will be deeply saddened to know of the death on Sunday 10 July of Adam Sawyer, our Hall Supervisor, aged only 29. Adam had been fighting cancer for some months.

Adam came to Univ in June 2011, soon after leaving school, as a Food Service Assistant, first on a casual contract, and then, from January 2014, as a Variable Time Employee. In October 2015 he was promoted to the role of Hall Supervisor, a full-time role, which he performed for the rest of his life. He was a much-valued member of our front of house team, and will be greatly missed.

At Univ Adam had many friends among his colleagues, some of whom had known him even from their schooldays. Among the colleagues whom Adam came to know was his future wife, our Hospitality Officer, Vivian Martins Tavares. Adam and Viv had a daughter, Ayla, who was born in March 2020. They were married on 29 April 2022, and on 15 May a blessing for their marriage was given in the College Chapel.

We send our deepest condolences to Viv and Ayla, Christian and Camilla, and to all of Adam’s family, at this sad time.

A funeral service will be held for Adam at 11am on Friday 5 August 2022 in the College Chapel. All will be welcome. No flowers please by the family’s request. Details for donations will be available at the Service.