Hellenic Commander of the Order of Honour 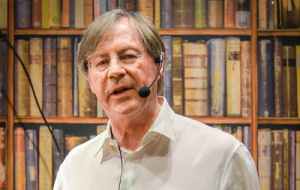 The Government of the Hellenic Republic has awarded Professor Paul A Cartledge, Salvesen Junior Fellow 1970-72, the insignia of the Commander of the Order of Honour for his “contribution to enhancing knowledge about Greece in the United Kingdom and reinforcing ties between our two countries.”

Paul Cartledge is Emeritus A. G. Leventis Professor of Greek Culture at Cambridge University and a Fellow of Clare College. He has published extensively on Greek history over several decades, including The Cambridge Illustrated History of Ancient Greece (Cambridge 1997, new edition 2002), Alexander the Great: The Hunt for a New Past (2004, revised edition 2005) and Ancient Greek Political Thought in Practice (Cambridge, 2009).