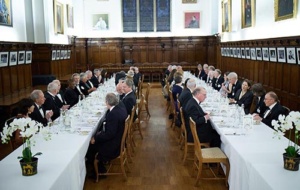 The Covid-delayed Golden Anniversary Reunions, for those who matriculated in 1970 and 1971, were held jointly on the weekend of 26 and 27 March 2022. Over 50 Old Members and guests attended, with most staying in College. We were blessed with glorious Spring sunshine and, as far as I could tell, everyone enjoyed themselves.

Arrival tea and coffee was a time of desperately trying to recognize half-remembered faces and assessing what damage 50 years had done. The difficult bit over, proceedings began in earnest, at 3.45 pm, with a quiz in the College bar. The questions, set by Robin Darwall-Smith, especially the early ones on ancient College history, caused much consternation. But this was nothing compared to the bafflement at the end over which team had won. After the quiz, some proceeded to the Chapel while others retired for a rest before pre-dinner drinks with the Master, Baroness Valerie Amos.

Dining again at a formal dinner in Hall was the highlight of the weekend for most. The old place has changed little since 1970. However, and quite rightly, the effect of the formal portraits of previous white, male Masters has been softened a little by a row of photographs reflecting a more diverse community. Grace considerably delayed the arrival of the food but, when it came, it was excellent and was accompanied by some well-chosen wines which flowed freely. Valerie gave a welcoming speech in which she emphasised the leading role that Univ. has played, at Oxford, in opening up more opportunities for students from underprivileged backgrounds. She went on to outline some further initiatives to promote greater diversity in College. We were then treated to an appearance from beyond the grave by Lord Maud (Master at our time) in the guise of Reggie Oliver, who excelled in the role. In inimitable style, ‘Maud’ regaled us with stories of contemporary tutors such as Leslie Mitchell, Gareth Evans and Tom Parker. He was certain that George Cawkwell could have drawn on lessons from Xerxes’ experiences to put Putin back on the right track. After dinner, a remarkable number showed the incredible stamina possessed by the 1970 and 1971 cohorts by returning to the College bar. A playlist of the popular music of the time, compiled by Paul Gambaccini, came through the speakers. Given the time of night, it was an opportunity for Old Members to look plaintively into their glasses and recall how much better music and everything else had been in their era.

Breakfast brought the realisation to many, following the excesses of the previous day, that they were not as young as they had once been. Nevertheless, a relaxed atmosphere prevailed as stories were exchanged with old and even some new friends. The weather continued to be kind for those who went on guided tours of the Ashmolean, the College, and the Univ. North site. Others took advantage to go on the river and remind themselves that they never were any good at punting.

I’m sure all who attended would wish to join me in thanking Valerie, the College, and the Alumni and Development Office (especially Tess Raven) for making the arrangements and for the hospitality which made the event so enjoyable. All Golden Anniversary Reunions are associated with an appeal and ours is raising money for a lift that will permit disabled access to the Mitchell building. The lift is expensive because it requires structural alterations to the building and must fit in with its surroundings. It was pleasing to hear how much has already been raised for this excellent cause by 1970 and 1971 Old Members. It is still not too late to contribute and you can do so using this link.

We hope you enjoy this gallery of images from our Golden Anniversary Reunions.