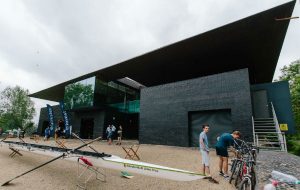 In the 1880s, the Oxford University Boat Club (OUBC) had obtained permission from Univ to erect a boathouse, designed by John Oldrid Scott, on land owned by the College on the banks of the Isis. At this time Univ, like all other Colleges, had a barge moored on the Isis for the use of its rowing crews. After 1945, however, the Colleges began to replace their barges with boathouses built by the river. In 1964, the OUBC’s lease on their boathouse expired, and the College decided to take it over for its own use, and sold its barge (which is now in private ownership). This boathouse, unfortunately, was completely destroyed by fire in September 1999. After much debate, it was decided to replace it with a completely new structure. The dramatic new boathouse was designed by Shahriar Nassar and Steve Burrows of Belsize Architects, and was opened in May 2007 by Colin, Lord Moynihan (matriculated Univ 1974). In 2008 it received a Royal Institute of British Architects (RIBA) South award. 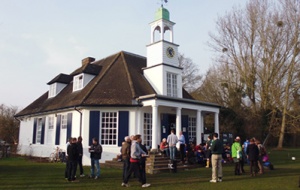 In the nineteenth century, Univ’s students had used land in Cowley or the University Parks for their sporting activities, but in 1910 it was decided to convert some land owned by Univ on the Abingdon Road into a sports field. The new grounds were opened in May 1914. The pavilion, which was built as part of this development, was designed by Clough Williams Ellis, who is best known for creating the village of Portmeirion. 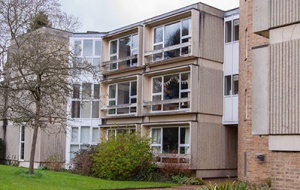 Like all Oxford Colleges, Univ’s student population expanded greatly after 1945, and there was no room to accommodate everyone in College. The decision was therefore taken in the late 1960s to create an annexe in north Oxford. Land was purchased in Staverton Road, and the site developed in 1970–4.

Around an existing house – now renamed Redcliffe-Maud House, in honour of then Master of Univ Lord Redcliffe-Maud – were constructed four accommodation blocks. They were designed by Sir Philip Dowson, who studied briefly at Univ as an army cadet during the Second World War, and who served as President of the Royal Academy in 1993–9. These four buildings, named after past benefactors to the College, are called Greenwood and Bennet (for single students), and Skirlaw and Percy (couples accommodation). Despite initial disapproval in official circles, the new buildings quickly became universally known as “Stavertonia”, and even this has been shortened to “Stavvers” or just “Stavs”.