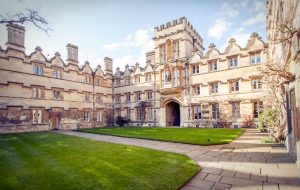 Radcliffe Quadrangle was built in 1716-19 thanks to a big legacy from Dr John Radcliffe (1650–1714), a former undergraduate of the College who had established himself as a successful (and very wealthy) society doctor. As well as leaving money to Univ for the building of a new quadrangle and the endowment of two Fellowships in medicine, Radcliffe also gave money to the University of Oxford to pay for the erection of the Radcliffe Camera, the Radcliffe Observatory, and the Radcliffe Infirmary.

Radcliffe’s gift of a new quadrangle, however, came with strings attached. The new building, he wrote in his will, should be “answerable to the front already built.” We therefore built his quadrangle in the same style of the Main Quad, designed back in the 1630s. To give you an idea of how old-fashioned this style of architecture was by now, look at Queen’s College across the road from us, which was being built at more or less exactly the same time, but in the then very modern classical style.

As originally intended, the eastern side of the new quadrangle (now Staircases X-XII) was intended to be the Master’s Lodgings. In 1879–80, after the current Lodgings had been built, this range was converted into student rooms, and Staircase XII created from scratch. 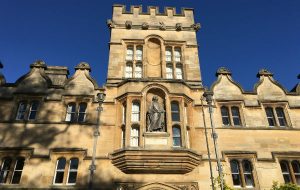 Radcliffe Quad is remarkable in one other aspect: the quadrangle proper is set out on the same axis as that in the Main Quad, but both High Street and Logic Lane curve round at this point. There are therefore barely any square or rectangular rooms in the whole quad.

Of the statues in Radcliffe Quad, Dr Radcliffe himself stands on the inside looking over “his” quad, while a statue of Queen Mary II looks out on the High Street to the outside. Both were installed in 1719, just as work on the quad was coming to an end.