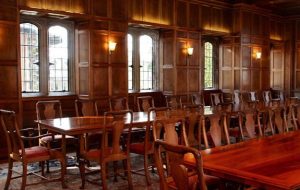 The Alington Room is a small dining and function room situated above Univ’s kitchens. This space was originally used as the College’s Library, but when the current Library was built in the 1860s, the room was split up into student rooms. The current room was created in 1956, and designed by Sir Albert Richardson. Most of the work was paid for by Arthur Goodhart, the then Master. Goodhart refused to have the room named after him, and asked that it be called instead the Alington Room, in memory of Giles Alington, a much-loved Fellow of Univ who died at the age of only 42 in 1956. 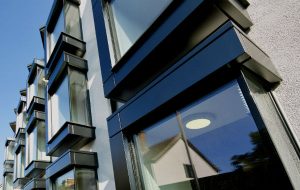 The area between the Examination Schools and Logic Lane had long been a jumble of warehouses and commercial buildings. In 1958–62, however, this was all swept away to be replaced by a new accommodation block and seminar room, designed by the architect Stirrat Johnson-Marshall. Just as with the Alington Room, almost all the money for the project came from Arthur Goodhart, and this time he could not escape having the new buildings called the Goodhart Building and the Goodhart Seminar Room. The buildings, formally inaugurated in 1962, also include a squash court. In 2014/15 the Goodhart Building underwent a major rebuilding and refurbishment, which was designed by the firm of Freeland Rees Roberts. 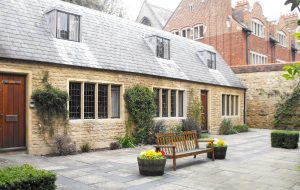 To the south of Kybald House there was once an almshouse called Parsons’ Almshouse. In 1957–9, however, Helen Altschul, sister of Arthur Goodhart, and her husband Frank paid to have a new almshouse built in St. Clements, and the existing building converted into student accommodation. In 1963/4 a barn alongside the old almshouse was covered into four studio rooms by the firm of Booth, Ledeboer and Pinckheard. The new complex was inaugurated in 1964, and named Helen’s Court in honour of its benefactor. 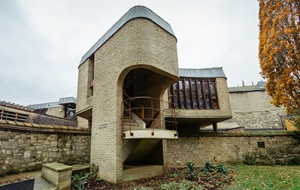 The area to the south of Univ’s Library contained an old cottage which had been used by the Works Department. In 1968–71 this area was cleared and replaced by a new building, designed by John Fryman of the Architects Design Partnership. The ground floor was taken up with space for the Kitchens and the Works Department, while the first floor would provide accommodation for the Weir Common Room, our graduate common room. The whole building is named in honour of Sir Harold Mitchell, an Old Member of the College, who paid for its construction. 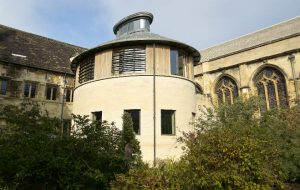 The Buttery and Butler Room

The Buttery and Butler Room above it are in the newest building on the College’s central site. The Butler Room is named in honour of Lord Butler of Brockwell, Master 1998–2008, and was formally opened by him in February 2009. The architects were Freeland Rees Roberts.