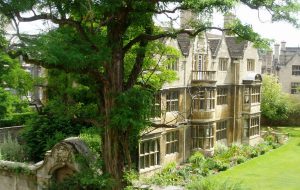 The earliest known home for a Master of Univ was the tower above the main entrance to our medieval quadrangle, which we know the Master was occupying by the early 16th century. In 1531, however, the then Master, Leonard Hutchinson was allowed to move out into a house called Little University Hall, which was next door to the old quadrangle, to the east (and offered more space).

Successive Masters lived in Little University Hall until 1716–19, when it was demolished to make way for Radcliffe Quadrangle. The east range of this new quad (now staircases X–XII) was set aside for the use of the Master and his family.

Radcliffe Quadrangle was not a great success as a Master’s Lodging: successive Masters and their families found the rooms too cramped. At the same time, the College needed more room for its growing student population. Finally in the 1870s, it was agreed to build a brand new Lodgings as a separate building, and to turn the old Lodgings into student rooms. Between 1877 and 1879 the present Lodgings was built by the architects George Bodley and Thomas Garner. 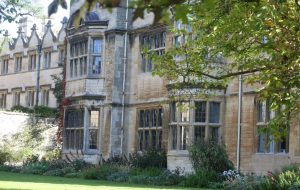 Documents in the archives show that they chose to design the Lodgings in a sixteenth century style, to blend in with the rest of the College. Bodley and Garner were very successful at this sort of style-changing, because a few years later they built a new President’s Lodgings at Magdalen College which fitted in with the fifteenth-century buildings there.

One of the most striking rooms in the Lodgings is the dining room. Around its walls is the Browne Library. John Browne was Master of Univ from 1745-64, and he bequeathed his personal library “to be used and enjoyed by the Master … and to be kept in the Lodgings”. Special bookshelves were built for the Browne Library in the then Master’s Lodgings in Radcliffe Quad, and so the dining room in the new Lodgings was designed to be large enough to have both books and shelves installed there.