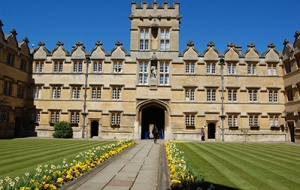 Once Univ began to accept undergraduates in larger numbers, our medieval quad was no longer large enough to accommodate everyone comfortably. From at least 1610, members of Univ were hankering after building a grander replacement, but we lacked the funds to do so. Then, in 1631, an Old Member called Sir Simon Bennet died, leaving the College a large sum of money, and it was at last possible to start afresh.

The new quadrangle was designed by Richard Maude, and its foundation stone was laid on 17 April 1634. Maude had previously worked on Canterbury Quad at St. John’s College and would go on to design the Second Quad at Jesus College, 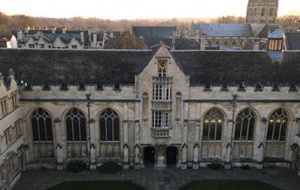 In 1639 work began on the south range, with the Hall and the Chapel, but, just as their outer walls had been finished, disaster struck when civil war broke out in England in 1642 and all building work had to stop.

Nothing more happened for almost twenty years, apart from the completion of the new Hall. Univ still had to use the surviving parts of its old quadrangle, and the College must have presented a very bizarre appearance, consisting of two fragmentary quadrangles.

In the 1660s, work restarted in earnest. The Chapel was finished in 1666, and then the Kitchen wing to the south of the quad was started in 1669. Finally in 1675 work started on the last range, on the east (with Staircases VI-VIII). Sir Simon Bennet’s legacy had all been used up by now, and so the College had to engage in a major fundraising drive among its Old Members. 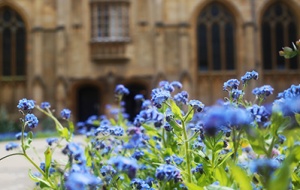 The east range was finally finished in 1676 – over forty years after work began on the new quad. One contemporary observer wrote (rightly) that the new quad made the College “looke very handsom, and not inferior in beuty to any other in the University”.

Much of the Main Quad remains unchanged in appearance since 1676. However, the facade of the Hall and the Chapel has been altered twice, first in 1799 when one of our Fellows, James Griffith, designed it in a more Gothic style, and then in 1957 when Stephen Dykes Bower created the facade we know today. 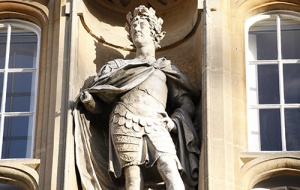 The Main Quad originally had no statues in it. The statue of James II inside the quad was given to the College in 1687. It is one of only two extant statues of James in the whole country (the other one is in London, outside the National Gallery). If you look carefully at the statue of James II, you will see that he has no right hand. This has long been a mystery, because no photograph or picture has ever come to light which shows James with both hands intact. We therefore do not know when he lost his hand, or what he might have held in it. 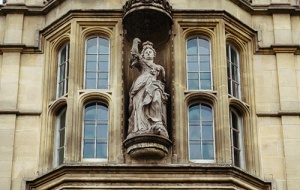 The statue of Queen Anne facing the High Street was given in 1709. So far as we know, no statues have ever been installed in the niches above either monarch.