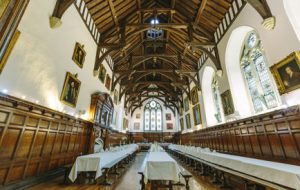 Work started on the Hall, just like the Chapel, in 1639, but had to stop in 1642 when war broke out. In December 1655, however, the then Master and Fellows decided to complete it.

This was a difficult time for the College: its then Master and many of its Fellows had been expelled by Parliament after the Civil War, and many of its Old Members had supported the King. Few Old Members wanted to support a College run by intruders, as they saw it. Nevertheless the money was eventually raised from various sources, and the fine hammerbeam roof of the Hall was built between March 1656 and July 1657. It is possible to read “1656″ in the lantern there. 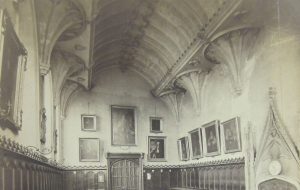 In 1766, the College, encouraged by one its alumni, Sir Roger Newdigate, decided to redecorate the Hall. Newdigate was an early enthusiast of the Gothic Revival style, and his chosen architect, Henry Keene, clothed the Hall with fresh panelling and covered its roof with a dramatic fan-vaulted plaster ceiling which owed much to such models as Henry VII’s Chapel in Westminster Abbey. The new interior was much admired by contemporaries, but intensely disliked by the Victorians, because it was so greatly at odds with their conception of the Gothic style. 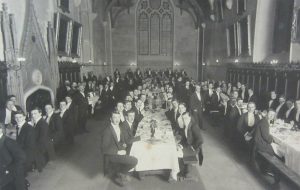 In 1904, their opportunity came. It was decided to lengthen the Hall westwards, because of the rise in the number of students. The old roof was discovered above the 1766 ceiling largely intact, and so the ceiling was taken down, the roof restored, and the Hall lengthened in the style of the 1650s. This was when the Hall was fitted out with its current set of windows, which include the coats of arms of many benefactors to the College. 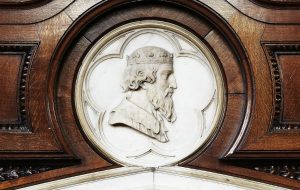 Two remnants of the 1760s decoration still survive. The fireplace was retained, and the marble roundel of King Alfred above it was left uncovered by the wooden panelling above. Secondly, when the 1760s panelling was removed from the Hall, some of it was put in the Payne Room in the SCR, where it still remains.