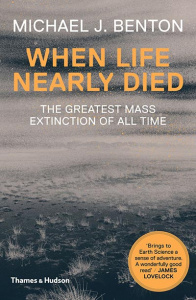 Having studied Geology at GCSE, I was particularly attracted to the idea of studying Earth Sciences, which is Oxford’s equivalent of Geology, at university. One of the most exciting aspects of the subject, in my opinion, was the catastrophic events known as mass extinctions in which a vast percentage of life is wiped out in a relatively brief amount of time. A key example of such an event is the extinction of the dinosaurs, known as the K-T mass extinction. This fascination drew me towards Michael Benton’s book When Life Nearly Died. Benton’s book focuses on the greatest mass extinction in Earth’s history, the end-Permian mass extinction, that occurred 250 million years ago and was far more severe than the dinosaurs’ extinction.

Michael Benton begins by giving a review of Earth history traveling forward in time from the beginning of life on Earth to the present, particularly focusing on the Permian mass extinction which almost became the end of life on Earth. In relation to the Permian, he focuses on the method of collecting data and the various lines of evidence we use to be able to infer information about our past. This introduced key ideas such as palaeontology, and the different types of stratigraphy, which are vital parts of geology. I found that the book at times was a little complicated and took a little while to get to the point of the mass extinction, but, by staying committed, it gave a clear insight in to the key methods used to determine Earth’s past in simple terms that someone with little knowledge of geology could understand. Additionally, Benton explained in clear detail the end-Permian mass extinction, the KT extinction, and evolution of life as a whole explaining how these extinctions have shaped future evolution.

What I found most fascinating about the book was how we are still unsure of the exact cause of the extinction and are unlikely to ever know. This became a key theme in Earth sciences and part of the reason I find it such an interesting subject, as it is constantly evolving and changing with new evidence. Benton’s strongest theory to explain the end-Permian extinction is mass volcanism of the Siberian traps, which would have caused severe climate change and a destabilisation of the Earth’s atmosphere making conditions on Earth particularly difficult for life. However, it is made clear that with new evidence, this view could change and is open to adaptation and criticism. This was particularly interesting as the impact of climate is so linked to Earth sciences as well as being a major issue in society at the moment.

I have found the knowledge gained from Benton’s book very useful and the topics it introduces from palaeontology to climate made up a vast amount of the first-year course and key ideas of Earth sciences as a whole.