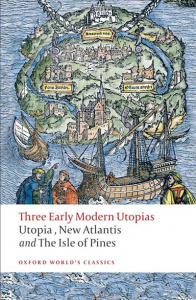 By Thomas More
Review by Clara (History and Politics)

I had originally wanted to apply for PPE, but I loved A Level History and knew that I wanted to continue with it to degree level. I did love politics and in particular political theory, so when we started learning about the Tudors at AS, I thought I’d read Utopia by Sir Thomas More. I ordered it thinking it was going to be this major hefty work – turns out it was about 108 pages long, which only added to my excitement. (I’m not the fastest reader). It was in translation from the original, so if anything that made it easier to read – the translator made the concepts a lot more readable.

Utopia is the presentation of More’s ideal society. It is narrated by a character named Hythlodaeus, meaning “speaker of nonsense”, and utopia translates from Greek as “no place”. The society described is almost communist in its traits and customs; More condemns slavery, capital punishment aside from for adultery, and acquisition of luxury. The chamber pots in Utopia are made of gold, simply to sully the image of gold as a luxury. Everyone does a specific amount of work, and everyone wears the same clothes and is given the same food. There are also complicated electoral systems to ensure a fair democracy!

I was totally shocked by this book; written in 1516, More’s ideal state seemed so far in advance of any other views of his time. Marx and Engels only collaborated on their works on communism in the mid-19th century – about 300 years later. I was also surprised by More’s leniency on divorce – in Utopia, couples with what we would term “irreconcilable differences” would be allowed to separate. Given the historical context of Sir Thomas More, and knowing he was martyred for opposing Henry VIII’s divorce and subsequent break with the Catholic Church, the text threw up some interesting questions and sparked my interest in both history and political theory. It certainly motivated me to apply for History and Politics, which I am now studying.

Definitely read this book if you are thinking of applying for History, History and Politics or PPE – it is a relevant and short (!) text that is still being discussed almost 500 years after it was first published.

I study Philosophy, Politics and Economics but I had not studied any of those subjects before applying to Oxford, so I did feel nervous about the whole application process. It is quite normal for PPE students to not have studied all the subjects before especially as some sixth forms (like mine) do not offer these subjects, so do not worry if you are in the same boat. I had been interested in politics, but this was mainly watching the news and trying to understand what was happening with Brexit. I had not read any political theory before, so I decided to read Utopia. The book laysout the political theory of English lawyer, Thomas More. As I was studying A level History at the time, I had heard of More before, due to his opposition to Henry VIII’s reformation. However, I never knew his political writing had such an impact.

Utopia is a conversation between the characters “Morus” and “Hythloday” as Hythloday retells his travels to Utopia. He describes it to be a perfect place with, for example, wealth distributed evenly and a successful democratic system. Utopia is split into two “books”. In Book 1 the two characters discuss the social and economic issue in early 16th century England, while in Book 2 it is thought that More directly answers these problems with solutions. Many of these issues are still relevant today which for me made the book more interesting as I could understand More’s wish for solutions.

As like today, there was a societal divide in wealth when More lived. It would have been shocking at the time like now to think of how Utopians (those living in Utopia) would use gold for unglamorous functions including chamber pots. I think More went to the extreme in this case to show his opinion that the symbols of wealth and greed should not have the value it does rather it is just a metal. Utopians also even eat the same food and wear the same clothes which would be bizarre for us and those reading it at the time but was More supporting a more equal society rather than having really wealthy people and then the really poor.

I would recommend Utopia to anyone who is interested in studying Politics at university as despite being an old text it still remains relevant today with universal issues such as poverty and wealth. However, if you are reading around your subject, do not feel this has to just be limited to books. You can listen to podcast, go to talks in your area (I went to a few, when I was applying, at my nearest university, which were free so may be worth having a look online), and complete online courses. Not only will doing this help you to explore your subject more, they are also good things to include in your personal statement alongside any books you have enjoyed.