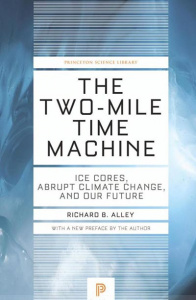 By Richard B Alley
Review by Dan S (Earth Sciences)

When I first began exploring Earth Science as a subject of study at university I was naive in thinking that rocks offered the only insight into the Earth’s past. This notion was refuted by the fact that multiple sources are commonly used in Earth Science to extrapolate a picture of our planet at different stages in its history; in this case ice.

As the author, Richard B Alley, states in the introduction, the book can be split into three sections: what we know about past climates, how we have learnt this, and how climate may change in the future. Although parts are devoted to explaining general planetary processes that govern climate, the author constantly links this back to his research of ice cores in Greenland which we are able to read so much from.

This is a science heavy book. However, the fact that the author was personally involved in the ice core project allows personal anecdotes made it much easier to relate to than a textbook. I felt the book gave a good insight into the work of a research scientist in the field.

For me the book also introduced many concepts such as negative feedback and contrasts in magnitude that are common in all Earth Sciences, not only climate. I was made to think twice by many of the ideas raised in the book; for example, there having been an increase in ice at the poles due to global warming. Surprisingly this is explained by linking only a small number of simple concepts.

The way in which Alley posed a question which he then proceeded to answer was a common format that I really appreciated. The question of a “goal for Earth Science” particularly resonated with me. Alley discusses developing an “operations manual” for Earth which will allow us to make informed decisions in relation to global warming.

This book demonstrates the fact that Earth Science is a very broad subject beyond just the study of rocks. By reading into various different areas you may spark an interest which you will be able to pursue fully at university.