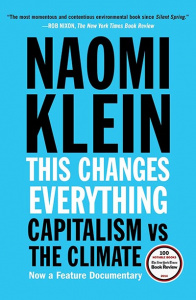 When considering studying PPE, something that was really important to me was finding out why the three subjects were banded together and what (if any!) use they could be together to anyone outside of classrooms and lecture theatres. This Changes Everything by Naomi Klein was one of the books that persuaded me it could. Not only does it explore the very real issues posed by climate change that many authors and commentators shy away from, it also takes you through real life responses that countries, leaders and individuals can take which require policy, the economy and our own personal values altogether.

In essence, Klein explains how in order to make any dent in combating climate change, there needs to be a shift in mentality from our current “extractivist” mind-set, which has so far lead us to the tipping point of global temperature rise, to a more reciprocal and circular relationship, not only with the planet, but with each other. Although the subject material is serious, Klein manages to take you through it so gently that by the time you realise the depth of information she has taken you through, you’ll wonder how you never thought of it yourself!

The book is written mainly chronologically, which allows her to build up her argument clearly, taking you first through where the idea of man as master of nature came from, and giving information on some key philosophers from the time, all the way through to how, through a combination of tough radical policy and commitment, we, as a society, can come through the other side. On the way, she addresses a lots of key issues such as the financing of political parties and interest groups, the allocation of the market economy, the “escape narrative” – that is the feeling we all have that something miraculous will be invented that will save us from the brink of disaster – and key things that we, as individuals, should take part in to make a difference, such as divestment campaigns.

This book is perfect for showing how related to each other global politics and global economics are and how helpful it will be to know how they can work together to effect positive change. It also introduces you to lots of topics that you could explore further so as well as being a fantastic read in itself is also a great first step into other topics you might be interested in if you are of a PPE mind-set. Klein manages to make digestible one of the biggest issues of our generation and has some incredibly interesting insights presented in an easy to grasp way: I would thoroughly recommend it!

The main reason I applied for PPE was that I wanted to study something that would give me the skills and knowledge to tackle global issues. Climate change is becoming the central issue of our time, precisely because it ties into so many others like wealth inequality, economic growth, justice, and power. This Changes Everything highlights those links and made me really think about what I wanted to contribute to the world.

Klein analyses the role of the environment in modern politics and economics on the way challenging concepts are embedded into society. For instance, she criticises the idea that growth is the fundamental goal of a healthy economy, instead arguing for the prioritisation of an equitable distribution of wealth and a circular, reciprocal relationship with nature. She points to Indigenous cultures and their valuable role in making legal challenges to large-scale extraction projects on Indigenous land. While you can, and should, think critically about the author’s vision of a grassroots climate revolution, her interaction with people of different cultures provides a fascinating contrast to attitudes taken for granted in developed countries.

The topics addressed in this book are supported by ample research. Klein presents a roadmap of how the switch to renewable energy can work, pointing to studies and real-world examples of publicly owned energy in German cities, Denmark, and Canada. She proposes ambitious policies to cut emissions, from a variety of taxes designed to hit the biggest polluters to social programmes like minimum income. In doing so, Klein highlights how the climate crisis is providing the opportunity to forge a fairer, more sustainable world. The ethical issues raised are particularly interesting, such as the responsibility of historical emitters like Britain to pay back their “climate debt” by financially supporting developing nations. There is plenty to develop your own views about and read further into.

Klein analyses different perspectives on the environment, from outright climate deniers to those who prioritise free trade and industry to grassroots climate activists. The book’s strength is that it doesn’t simply dismiss those of a different viewpoint as ideological enemies, it assesses their motivations and shows how different groups can find common ground in wanting to protect the environment. Klein highlights local examples of direct resistance to fossil fuel extraction, providing a rallying cry for such activists across the world to form a powerful environmental coalition. Following the mainstream attention of protests like Fridays for Future, such a vision seems even more relevant today.

Despite the seemingly overwhelming subjects that the book deals with, it makes them really accessible and interesting to follow. I came across it myself on Staircase 12, and 8 years after it was originally published, I think its value has only grown; its warnings seem more relevant, and its message is more motivating than ever. For students passionate about the environment or simply interested in global issues and how they tie together politics, economics, history and ethics, I highly recommend this book!