The Simpsons and their Mathematical Secrets 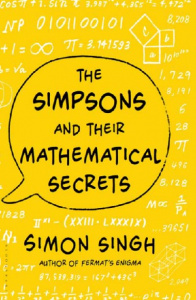 I first learned of this book by watching maths videos of the writer Simon Singh on YouTube. I quickly became fascinated by his enthusiasm for maths and went out and bought his book. The Simpsons is an absolute cultural juggernaut. It has been the longest running sitcom for years now and it’s a struggle to find anyone who doesn’t know something about it. Yet, it is even more of a struggle to find someone who knows that for years now, the writers of The Simpsons have been smuggling maths jokes into their show. In this book Simon Singh uncovers the jokes.

Singh reveals that many of The Simpsons’ writers are very highly skilled mathematicians having Master’s degrees in maths, physics or computer science and sometimes even PhDs. As an example, David X Cohen, one of the writers, graduated from Harvard University with B.A. in Physics, then went to University of California, Berkeley, to get an M.S. in Computer Science.

Throughout the book Singh uncovers and explains maths jokes that most audience members would’ve just glossed over without ever thinking twice about it. He outlines the history behind the maths and explains the mathematical concepts in a way that is understandable to non-experts while also providing further insight for those with some familiarity with the topic. He does all of this with a fun and engaging writing style. One of these maths references is to Fermat’s Last Theorem. There are in fact two references to this in The Simpsons whereby a supposed counterexample is given to this problem. Fermat’s Last Theorem was proven by Oxford’s Professor Andrew Wiles whose name has been given to the Mathematical Institute’s new building, which was opened in 2013.

I would highly recommend this book to anyone with even a passing interest in either The Simpsons or mathematics as it is written in an approachable yet interesting style and can be engaged with by a reader of any level.