The Planet in a Pebble 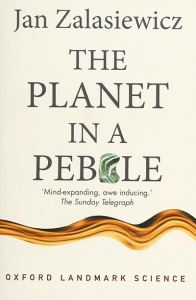 Having never studied Geology prior to university, the idea of picking up a textbook full of complicated scientific content was quite daunting. However, whilst browsing on Amazon for interesting geology-esque books, I stumbled upon The Planet in a Pebble. Immediately the title appealed to me as I enjoyed the idea of being able to infer lots of information about the Earth from something so small and seemingly insignificant as a pebble.

Overall, the book describes the life story of a single pebble discovered on a Welsh beach. The author writes in a narrative-like way with scientific information thrown in which made the book far more readable than any textbook! Zalasiewicz takes you through the processes that formed the pebble and its constituents. He concentrates on a range of scales, from the pebble’s atomic structure to the erosion of large mountain belts that have been thrust upwards due to global tectonic forces.

To me, the book touches upon one of the most important skills within geology – the ability to understand scales of measurements, especially time and distance. Often we work with information spanning millions of years which means that geologically-speaking, an event that lasts thousands of years is thought of as ‘brief’. I found the book helped me to think about time very differently.

I would highly recommend this book as it begins to reveal the breadth of study within Earth Sciences. Zalasiewicz touches upon topics such as palaeontology, mineralogy, stratigraphy, palaeobiology and early tectonic plate theory, without over-complicating anything. The breadth of topics covered almost guarantees that the reader will find something that sparks an interest.

Overall, The Planet in a Pebble is an easy-read which is cleverly written to strike the perfect balance between science and narration. The book highlights Zalasiewicz’s ability to creatively communicate scientific ideas with the pebble acting as a vehicle for discovery. This is a great read for those looking for a casual introduction to the many aspects of Earth Science.

One way in which this book is appropriate for somebody considering applying for an Earth Sciences course is that the author’s name looks very tricky to pronounce! This is often the case with geological terms such as the names of minerals or exotic ways of measuring information about them, however Zalasiewicz’s (Za-la-shev-ich’s) book will walk you through a wide variety of both of these, and much more besides.

It is based on the premise that you have picked up a slate pebble on a beach in Wales (probably with a gloved hand in horizontal sleet!) and have decided that you are going to try and find out as much information from it as you possibly can. You probably think, like I did, that this means that the book is only a few paragraphs long at most but I was immensely surprised to discover that, with a bit of geological trickery, it is possible to work out not only fairly simple (and yet still impressive) information such as whether the mud which makes up the pebble came to rest at the bottom of a deep ocean or in a swampy river delta, but also things like how long the pebble has actually been on the beach.

One of the first analyses that the author makes of the pebble is to try and determine the relative proportions of chemical elements in the rock, he explains that even in something as small as our pebble, due to the sheer number of atoms, it is reasonably likely that it will contain many examples of even the rarest elements in the Earth’s crust which have abundances of less than 1 part per billion.

The book is a good representation of the wide range of dimensions that Earth Scientists have to deal with on a day-to-day basis. We start with a pebble, perhaps 5cm in diameter, and immediately we take a look at its atoms which have a diameter of around 1 Angstrom or 1 x 10-10 m, five hundred million times smaller. Later we then concern ourselves with the collisions of the two continents which resulted in the metamorphosis of the mudstones, continents which were on the scale of millions of square kilometres. In summary, you get used to using standard form and manipulating powers of ten very quickly in Earth Sciences and Zalasiewicz’s book demonstrates this perfectly, as well as giving you a bit of a head-start!

Earth Sciences is a very broad subject and this is one of the few books I have found that is able to cover such a wide and varied spectrum of subject matter without presenting it in a textbook-like manner. For me personally, the idea that it is possible to write a whole book based on just one pebble is incredible, especially when the aforementioned pebble was originally formed at least four hundred million years ago.

The Planet in a Pebble exposed me to how truly immense the Earth’s history is, both in terms of deep time and change. Reading it, I was struck by how difficult it can be to think on a geological timescale, with events which have taken millions of years being considered brief and hundreds of millions of years making up the geological history of many of the rocks we see today. Learning about the history of slate, even from just one part of the Earth, was deeply illuminating, allowing me to gain insight into the processes that have shaped the Earth from its inception from plate tectonics to the process of sedimentation and orogeny. I find the idea of a pebble as a time capsule, full of data that catalogues the Earth’s long past in almost perfect detail, that we are only just beginning to decode, to be most compelling. The way in which Zalasiewicz managed to create a coherent narrative following the entirety of the tumultuous and varied history of one pebble from the Welsh coast was particularly impressive, displaying the sheer breadth of subjects that are covered within the Earth Sciences umbrella — something which was a key component in me eventually choosing to study it at undergraduate. Ultimately, The Planet in a Pebble offered me an outstanding introduction to the subject which I now love, acting as a catalyst for me to explore the subject further and begin to discover which topics within such a broad subject interest me most particularly.