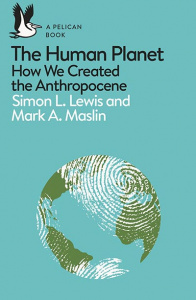 When I was exploring different topics in Earth sciences during my application process, I was asking myself, “What will the future rock record look like?” I was intrigued by what evidence of human life would be left to be discovered millions, or even billions, of years from now, just as we are discovering fossils of ancient life now. Could there be rocks containing parts of iPhones or buildings? If anything analyses rocks in the future, what would they think humans and other species looked like based on what remains?

The Human Planet addressed the questions I was exploring and brought to my attention the debate over whether we are living in a new epoch of geological time called the Anthropocene (‘anthropo’ meaning man and ‘cene’ meaning new), defined by when humans have had a significant impact on the planet. The book introduces geological methods, like radiometric dating and stratigraphy, in a way that is easy to understand. This makes the book accessible no matter your previous knowledge of the subject. It then explores anthropological climate change all the way through the evolution of humans, from their first emergence right up to the Industrial Revolution in the 19th century. The last few chapters of the book take all of the evidence and attempt to assign a date in geological time to the start of the Anthropocene, discussing whether it should it be from when humans first started farming, or from the first use of nuclear weapons, or somewhere in between.

Overall, the book analyses the scientific, philosophical and political angles to the debate and argues that we must be held responsible for our actions and respond accordingly by drastically changing society’s mode of life. The book does an excellent job of making the reader understand the impact of humam activity and the relatively short time span over which it has happened. The book left me with a greater understanding of the ways we have altered the Earth’s systems and the way the planet might look in the future if we carry on the way we are heading.