The Fly in the Cathedral 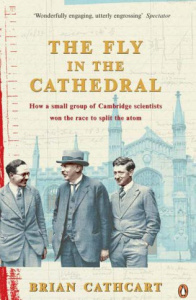 The Fly in the Cathedral is a fantastic book to read for anybody interested in studying chemistry or physics at university. I read it when I was applying for chemistry and wanted to read around the subject. This book was perfect for me as I had not done physics for A level and it is largely set in a physical laboratory in Cambridge. Practical science is really brought to life as a group of physicists have to design their own lab equipment and think up new methods to try and achieve something incredible- splitting the atom. They are trying to find out what an atom is made of and produce evidence to support their theories- an almost unthinkable goal at the time. The book gives a good insight into the workings of a lab and the ups and downs that come with it, covering everything from the amazing feeling of discovering something ground breaking to the frustrations of faulty equipment or unsuccessful experiments. The characters in the book include some of the best scientists of all time, including names that will become very familiar to you during your undergraduate course. It gives a really good account of their personalities and backgrounds and helps to paint a picture of the men behind the theories you will come to learn about in your degree. There are plenty of humorous stories of the antics of the scientists and the book is written in a style that is not very technical and easy to read.

I read a book called The Fly in the Cathedral which spoke about the developments in the understanding of the structure of the atom in the 1920s and 30s. It depicted how a research group (of Cockcroft and Walton) under Rutherford in Cambridge, designed their experiments in their attempt to ‘split the atom’. To ‘split the atom’, they aimed to accelerate alpha particles using high voltages and fire these at atoms. It follows their journey, as they struggle to deal with the limited technology of the time, for example, how they needed extremely high voltages to get the alpha particles to travel fast enough to penetrate the nucleus, but ways to generate such high voltages didn’t yet exist. This meant that not only did they have to invent a way to fire the alpha particles but had to design a machine to generate these voltages. The book then explains how they reached out through links to Manchester, to get equipment, that would help them achieve this. Alongside this, it tells of new theories coming out at the time, such as Gamow’s theory of alpha decay which led to the realisation that perhaps, such high voltages weren’t needed, leading Cockcroft and Walton, to attempt it at lower voltages, and actually ‘splitting the atom’.

Reading this highlighted the importance of communication in research, by reaching out and keeping up with developments in the field, they were able to progress much faster, than they would’ve alone. The book also depicts the competitive nature of research, when it describes how similar attempts to ‘split the atom’ were occurring at the same time. In particular, how in Berkeley university, instead of accelerating the alpha particles in a straight line, attempted to continually accelerate them in a cyclotron, using a magnetic field. However, despite getting the alpha particles to higher speeds, didn’t use it split the atom in time. Overall, I really enjoyed reading this book, as it gives such an insight into the atmosphere surrounding the research of the atom in the early 1900s and its competitive nature. It led me to truly appreciate the determination needed for their research, where the problems they faced led them to extend their project for several years, as they dealt with broken machinery, delayed deliveries as well as the problems in the lab and marvel at their perseverance. I’d recommend this book to anyone wanting to gain a snapshot into the theoretical chemical research of the early 1900s, it is fascinating to read and does not require too much prior knowledge of the subject to understand.