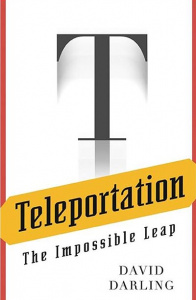 When I was in school, I was really worried that everybody else was doing lots of extra reading around their subjects, while I struggled to get past the first chapter of any physics book. I found it difficult to understand what the authors were saying and some things just went over my head! When it came to doing a project on teleportation however, I struck gold with David Darling.

His book talks about what teleportation technically is and the ways in which it would be achieved. He manages to explain areas of quantum physics, such as entanglement, without tying himself, and the reader, up in knots. It isn’t one of those books that are full of daunting equations and derivations. Sure, they look impressive if somebody is reading over your shoulder but they don’t make much sense to anybody (me) who hasn’t done a degree in physics yet!

Darling relates back to things that the reader will be familiar with (“Beam me up, Scotty”), but then he also talks about the real-life teleportation that is happening in labs across the world. I always thought that teleportation was a bit of a new-fangled thing, when really, people have been researching it for decades!

Everybody will have seen teleportation happening in sci-fi films and TV programs for years, but if you fancy knowing about the reality of it, then I would most certainly recommend that you have a gander of Teleportation: The Impossible Leap.