Symphony in C: Carbon and the Evolution of (Almost) Everything 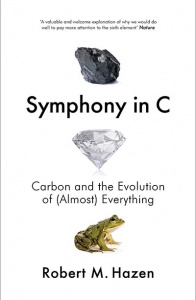 I first read Symphony in C: Carbon and the Evolution of (Almost) Everything out of curiosity, looking for reading material about Earth sciences. A lot of books relied on a broad knowledge of the subject, which I didn’t have because I hadn’t take geology before. Symphony in C was a great contrast to these books, and takes you through the basics of the study of carbon, and introduces you to a few more complicated ideas as well. It introduced me to many concepts we cover in Earth sciences, such as the structure of the Earth, the early Earth and the carbon cycle, to name a few.

Symphony in C is a journey through the history of all we know about the versatile element of carbon from the Big Bang to the emergence of life to the present and our relationship with carbon. It indirectly shows how chemistry plays a significant role in Earth sciences and intersects with mineralogy. Using language that is clear and easily understood, it is accessible, told in a narrative divided into four movements like a symphony — Earth, Air, Fire, and Water — in which Hazen tells the story of carbon in rocks and crystals, the carbon cycle, energy and industry, and life respectively.

Hazen also tells you of how carbon itself can tell a story, through carbon dating and through our relationship with the cycles of the Earth that we are greatly changing and impacting.

It’s a great resource for anyone who wants to understand the vast and interdisciplinary nature of Earth sciences, even those who haven’t taken geology before like me, as it tells it all through the discussion of a single element that can be found everywhere in life and is the basis of one of society’s biggest issues: the Climate Crisis.