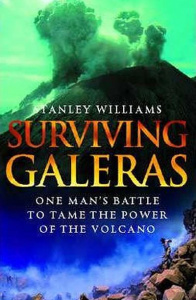 Stanley Williams doesn’t have an easy life in his field. Not only must he discern the wellbeing of volcanoes across the globe, he must face the backlash of the scientific community for some unfortunate decisions made on a field trip up Columbia’s Galeras volcano in 1993. Still, his story is a captivating one that explores how the science of volcanology combines probing some of the Earth’s most dangerous locations with confronting the public with difficult ideas.

Surviving the Volcano (also published under the title Surviving Galeras) is Williams’ autobiography of what he recollects happening on the day and days preceding Galeras’ fateful eruption in 1993. Galeras had been intriguing to volcanologists in recent years as it was one of 16 marked “Decade Volcanoes”– volcanoes that posed particular risk based on eruptive history and their proximity to large population centres in the 1990s. So, the city of Pasto in the valley below Galeras was made the location of a global volcanology conference discussing hazard risks posed by the volcano and its 15 brothers. Williams, an American volcanologist whose name was well known in the field internationally (with some controversy), was one of the conference’s coordinators. It was his job to communicate theories in volcano research and make sure everything ran smoothly. He believed the best way to fulfil this would be to lead an expedition into the unstable crater of Galeras and conduct measurements. However, a serious lack of judgement and, perhaps, arrogance led nine people being killed and Williams being incapacitated for years when Galeras blew her top.

The account is at times traumatising to read. There are detailed insights into the dangers associated with studying volcanology with graphic descriptions of hot projectiles striking Williams and his companions at high speed, and harrowing journeys told of the rocky road to mental recovery for the survivors – not least the author. Despite this, the book explores with real rigour and honesty the challenges in the lab, field and wider community working on volcanoes. Volcanoes are pitched as entities of duality. They have periods of activity that deserve nothing less than wide-eyed admiration, but also – as Williams certainly found – episodes of explosive, destructive behaviour. Surviving the Volcano demonstrates this duality in a profound way.

As a bridge to further academic reading on volcanology, there is no better alternative than Williams’ tale. It balances introducing key ideas in the science with a personal narrative, allowing even the most ignorant of readers to gather a quantitative understanding of volcanoes whilst gaining an empathy for the recipients of their effects. Whether you pity Williams for just having a cloud of bad luck on eruption day or feel that the blame of the catastrophe falls on him, reading Surviving the Volcano opens you up to the dynamic field of volcanology.