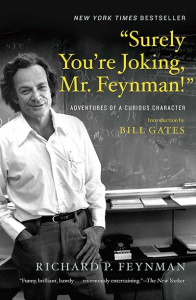 By Ralph Leighton and Richard Feynman
Review by Amy (Physics)

Richard P. Feynman was an amazingly talented American theoretical physicist, who won a Nobel Prize in 1965 for his contributions to the field of quantum electrodynamics (QED). He worked in many other areas of physics, including superfluidity and the parton model, and is known for his “path integral” approach to quantum mechanics, which is the reason we now draw squiggly “Feynman diagrams”. Aside from his work, he had passions for samba music, languages, art, safe-cracking and good orange juice, and was a very charismatic and inspiring man.

This book is an informal collection of anecdotes – the product of many recorded conversations with his drumming friend, Ralph Leighton – and covers many of Feynman’s memories. It includes funny stories about stealing doors from frat house rooms at MIT and his struggles with talking to women, but also more serious accounts of his involvement with the Manhattan project during WWII, the death of his first wife and his exasperation with the Brazilian science education system.

Feynman had an inexhaustible curiosity which made it almost impossible for him to give up on solving a problem. The first chapter tells of his tinkering with electronics as a child, and his earning of a reputation as a guy who “fixes radios by thinking!”. He also had a very mischievous streak, an insatiable need to one-up people and a disregard for authority, which often got him into trouble (he was once arrested for “testing the security” at Los Alamos by cutting the wire fence and sneaking in, and he used to crack their safes and leave messages pretending to be a Soviet spy).

The world through Richard Feynman’s eyes is an amazing place, full of things to try to understand. His sense of humour makes this book great fun, and a fantastic insight into one of physics’ most unique minds. It should perhaps be taken with a pinch of salt by aspiring physics and philosophy students, however. On attending a philosophy course in which he argues with the lecturer about bricks, Feynman describes his impression of the subject as “low-level baloney”.