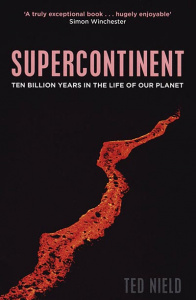 Ted Nield’s Supercontinent is an engaging book that, despite its seemingly specific name, offers a broad and exciting introduction to many fundamentals of Earth sciences.

Nield offers fascinating narration on the contribution of various key figures towards developments in our understanding of past tectonic plate movements. It was interesting to hear how plate tectonic theory got off to such a rocky (no pun intended!) start and how many fundamental flaws there were in Alfred Wegener’s original continental drift theory. Nield also accessibly explains the science and mechanics behind some of the processes occurring and the geological evidence used to make inferences about tectonic plate movements.

Supercontinent particularly serves to demonstrate how aspects of physics, chemistry and biology that I was already aware of from my GCSE and A Level studies are important in Earth sciences. For example, Nield explains how isotope ratios and the analysis of radioactive decay of certain elements can be used to track when particular rocks left the mantle. In combination with other data, this can be used to accurately work out the mechanism by which a particular supercontinent formed. It’s this integration of a wide variety of disciplines that makes Earth sciences so appealing to me.

Supercontinent was a suggested resource for exploring Earth sciences on the Oxford University’s department website. Prior to reading it, I was completely oblivious to the fact that there were many supercontinents that had existed before Pangaea. By the end, I was more astonished by the ingenuity of the techniques (many of which are covered on the Oxford Earth Sciences course) that have allowed multiple past supercontinents to be reconstructed than I was by the fact that the supercontinents themselves had actually existed! As Nield discusses billions of years of the Earth’s history, the book provides an excellent introduction to the concept of the geological timescale and the idea of how small-scale observations made today can allow us to make inferences about global-scale processes that have occurred in the past (and indeed the present!)

The awe that I felt after finishing Supercontinent inspired me to complete an Extended Project Qualification (EPQ) on the past movements of tectonic plates and the impacts of these on the Earth’s climate and ocean chemistry. Despite being explained in a very accessible manner, the scientific content of the book was thorough enough to give me a solid basis from which I was able to interpret aspects of scientific papers related to supercontinents despite not having studied geology beforehand.

Overall, Supercontinent is an accessible and enlightening read for anyone who has an interest in learning more about our planet’s past or the discipline of geology (in a truly awe-inspiring context!) as a whole and will almost certainly leave you with a greater appreciation of the complex history of the Earth.