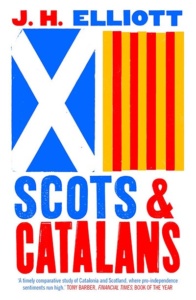 By Sir John Elliott
Review by Liam (History and Politics)

A book I particularly enjoyed reading was Sir John Elliott’s Scots and Catalans: Union and Disunion. Since I already knew that I wanted to study History and Politics, this book was very useful in demonstrating how even medieval history can still have an impact on contemporary politics. Additionally, the book goes further than just a political narrative and looks at the social and cultural developments which have fed into the secessionist campaigns’ underlying grievances and the development of identities.

Elliott’s comparative approach works well to chart out themes common to both independence movements and to give historians a better understanding of European state-building in this period. This comparative approach is not really present in A-Level History, so the book was very helpful as an introduction.

While the link between Scottish and Catalan campaigns for independence can appear coincidental or superficial, Elliot does a good job in demonstrating how the movements share common experiences. Both nations constantly had to put up with their local customs, traditions and institutions being undermined by attempts to centralise Spain and Britain. Moreover, Elliott looks at how both nations acted as the ‘junior partner’ within a union and how their societies and cultures would react to this.

I found the book helpful because it introduced the idea of historical comparisons, in particular looking at thematic issues. Elliott also goes to great length to place social, cultural, and economic developments alongside the traditional political narrative. Elliott tackles difficult questions surrounding the emergence of nationalist and separatist ideologies and constantly remains neutral and objective. Finally, the book provides and incredible amount of context behind two, very current, political movements.