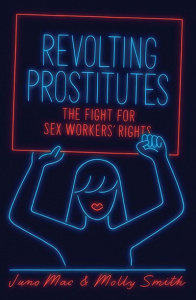 By Molly Smith and Juno Mac
Review by Connie (PPE)

Revolting Prostitutes: The Fight for Sex Workers’ Rights (Verso 2018) attempts to position the sex work debate in a Marxist context, encouraging us to empathise with those who sell sex by focusing on the material working conditions of sex workers. The text differs from many others that discuss sex work. Typically, philosophical investigations into sex work often centre on the ethics of sex work. The text is also unusual in that its authors, Molly Smith and Juno Mac, are both sex workers. Smith and Mac admit that sex work is bad work but they encourage us to think of it as such because work itself is so bad — not because there is something intrinsically bad about sex work as a form of work. This is because, according to Smith and Mac, “naming otherwise invisible or ‘natural’ structures of gendered labour is central to beginning to think about how, collectively, to resist or reorder such work” (p. 55). This line of reasoning is heavily indebted to the work of second-wave Marxist feminists — such as Silvia Federici — who note that under capitalist patriarchy, to declare something as work is the first step in refusing to do it in its current form. Although it is true that sex work is particularly bad work for those who engage in it, Smith and Mac root this in the working conditions of sex workers. These conditions are particularly poor as a result of government policy in the industry — policy that is often guided by moral claims about the goodness and badness of sex. After discussing “sex” and “work” Smith and Mac go on to examine this, exploring US border policy as well as alternate legal approaches to sex work.

All that being said, I recommend this text to anyone interested in studying philosophy, politics (or to anyone else — I gifted this book to an engineer as a secret Santa gift). It provides a clear and compelling account, persuasively encouraging feminists to place their moral considerations to one side and focus their organising energies on improving the material conditions faced by sex workers. It also provides a nice example of how we may have the duty to leave our moral feelings about sex at the door in the name of good politics.

This book features on the reading list for the Feminism and Philosophy finals paper. This paper may not available during every academic year — so perhaps don’t get your hopes up about studying it — however, it has been a highlight of my time at Univ. The fact that Revolting Prostitutes appears on a philosophy reading list would be unfathomable to me before coming to Oxford. This is all to say that Revolting Prostitutes is a text well worth reading that may expand your perception of what good political theory is.