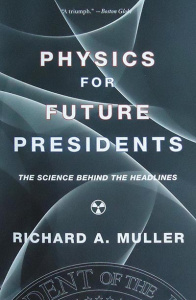 By Richard A Muller
Review by Oliver K (Physics)

Imagine you’ve just been elected as the leader of a country… what do you think you need to know? Economics? Law? Negotiation? How about Physics? It underlies the workings of the entire universe, and without a knowledge of Physics, it’s impossible to fully understand subjects that define the world, from fixing global warming to the risks of nuclear power to preventing terrorism.

Physics for Future Presidents uses this as a basis to explain the Physics that’s behind the news, explaining to you what’s really going on (so you don’t need aspirations of being Prime Minister for it to be relevant to you!). The book takes you through subjects from terrorism to space exploration, and explains the facts behind the media’s exaggerations – after reading it, you’ll be able to understand what’s actually going on. You’ll find out, for example, why a terrorist with a nuclear bomb isn’t as scary as you might have thought, and how preventing global warming may just be possible.

It was recommended to me by my science teacher, and ever since reading it in Year 10, I’ve found that I understand what’s going on in the news a lot better, and I can now back up my opinions with scientific facts. It’s a bit different to “traditional” Physics books, in that it doesn’t set out to teach you all the complex laws of the universe. But by explaining the Physics behind the headlines, you find you learn an awful lot, with the added benefit of everything you learn being relevant to daily life, making it all really interesting.

It’s an easy read, with no complex maths or technical language, but you’ll end up feeling way more knowledgeable about a wide range of Physics. Its author, Richard A. Muller, has advised the US Government, so he knows what he’s talking about, but he does it in a way that’s really interesting and enjoyable, whatever your level of knowledge.

If you’re thinking of doing Physics, any other science, or are just interested the news, I think you’ll find Physics for Future Presidents a fascinating read!