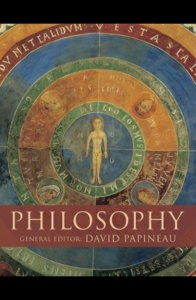 I don’t think I’m alone among PPE students when I say prior to starting this course I had no experience with philosophy. Whilst I had spent my whole previous summer trying to read every politics and economics book recommendation the internet gave me in order to create the perfect personal statement, I realised only a few months before coming to Oxford that I could barely give a good definition of what philosophy was. So, I did what any diligent future Oxford student would: I went to my local library and picked up the first book I saw with a cool cover and the word ‘Philosophy’ in bold on the front.

However as it turned out this super comprehensive introduction was actually exactly what I needed. Rather than being an overload of information, this book is broken up into different themes of philosophy with each section being written by an academic who specialises in this field, many of whose names I had already encountered when researching the best introductory guides to the subject. One reason I think this is such a great introduction is it showed me the philosophical aspect of things I’d never even considered looking at in that way before like maths and art, making it way more relevant and thus accessible than I could have imagined.

Whilst this exposure to some of the key concepts and philosophers I would come to study was super helpful and something that made starting the course much less intimidating, I would say even more helpful was actually how this book allowed me to start thinking like a philosopher. By making you really question some of the things you’ve up until now just accepted in life, this book somehow leaves you feeling like you know less after having read it than you knew before, and then questioning if you can ever truly know anything at all.

Overall though, it was this book that actually made me really excited to study philosophy rather than just seeing it as another part of my course, and I would definitely recommend it to anyone else unsure of where to start within such a broad subject or just looking to expand their view on the world in every imaginable sense.