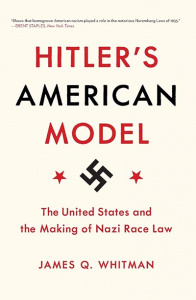 James Whitman’s Hitler’s American Model: The United States and the Making of Nazi Race Law is one of those books that grabbed me from the get-go. I am fascinated by US history and politics as well as Germany between 1933-1945, so this book was the perfect one for me. It details how Hitler and those in power at the head of the Nazi regime actively drew upon the American precedents of the persecution and oppression of African Americans to make the race laws that would lead to persecution of the Jews and the Holocaust.

Whilst the book obviously deals with some dark and disturbing material, it provides a fascinating read and is particularly illuminating in regard to the political turbulence present within the United States in the recent past. I think it’s really important when reading history to find relevance to the present and if you’re interested in US politics, this book is really topical and the one for you (especially if you’ve got a short attention span like me as it’s not that long of a read).

I simply found this book whilst perusing a bookstore! The book has really helped me with my degree as it’s helped to hone my ability to compare periods of history.

The book is short and really interesting to read, particularly as the topic is not too niche so it’s still accessible!