Evolution and the Theory of Games 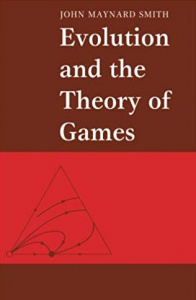 I was immediately captivated when I first learnt about evolution and genetics at school. This was what sparked my initial interest in studying Biochemistry. I was particularly interested in natural selection and how such a dynamic process can be so mechanistically, and to an extent mathematically, dictated. Reading John Maynard Smith’s Evolution and the Theory of Games opened my eyes to the world of mathematics in biology and provided me with a fascinating alternative way to think about evolution.

In this book Smith uses the principles of game theory to predict evolutionary outcomes of organisms, thus helping us to understand why certain phenotypic selections occur in nature. His simplest model is known as the Hawk-Dove game, where two animals contesting over a certain resource (for example, a source of food) can adopt one of two strategie: hawk, where the animal would fight over the resource but risk suffering injury, or dove, where the animal would retreat and surrender the resource. By assigning a value to the resource based on its importance and probabilities determining which strategy the animal will take, a prediction of the evolution of each animal’s population can be derived. I found this quantitative way of looking at evolution extraordinary and was amazed at the extent to which maths could be applied to biological systems.

Smith continues to enhance his model by adding new strategies which the animals can adopt, and even though I found some of the maths a little hard to follow, the principles discussed are easy to understand and highly logical. However, what truly had me gripped was how Smith uses these models to explain specific real-life scenarios. One particular example I found especially interesting was his explanation of the sex ratio and why in some species there are disproportionately more of one sex than the other. This was incredibly eye-opening for me and brought to my attention several factors affecting this ratio, which I previously had no knowledge about, while also explaining the factors with mathematical precision.

I would thoroughly recommend this book to anyone who is interested in genetics, evolution and even maths. While it can be tricky at times to follow, I found it extremely rewarding to work logically through the premises set out and develop an understanding of the concepts described.