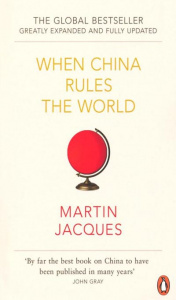 When I first picked up this book, I did not, at first, read it from cover to cover, as it looked pretty large and I saw that it contained a lot of information. Rather, I dipped into various sections, focusing on those relevant to what at the time were my primary interests when it came to China. This wasn’t a bad idea, and might be worth doing if you are interested but haven’t the time to read through a few hundred pages on the subject. In looking through the book in this way, I discovered that the author had a particularly intriguing argument, and that he writes in a way that is easy to understand. Suddenly the book did not look quite so scary as it initially had. With this in mind, I proceeded to read the rest.

The book, written by the economist Martin Jacques, is about China and its place in the modern world. Its usefulness therefore, is perhaps only clear to those (few as they may be!) considering taking up my subject. However, though its primary focus is on China, I think the book has far wider implications. For anyone interested in asking what conditions shaped our world into what it is today and what the world is likely to look like in the near future, Jacques provides fascinating answers. As might be expected in a book written by an economist, the argument is consistently supported by a large amount of economic data, which I’m sure will provide much fun to those interested in taking up Economics or PPE or something similar (for the rest of us, we can simply trust that Jacques knows what he’s doing when it comes to that). As well as economics, in investigating the conditions that might affect the future of China Jacques deals with many other universal topics and issues including politics, the environment, popular culture, the nature of modernity and international relations. Inevitably, there is also a heavy focus on the nature of the West, as well as other Asian nations such as Japan and Korea, which all provide examples with which Jacques informs us about the possibilities and dangers facing China.

So what is the core of Jacques’ argument? He takes the view that China, in becoming more modern, will not become more Western: on the contrary, it will adapt the world to meet its own standards. He shows that China will have a cultural effect on a global scale and that its rise is part of a larger process of reorganization of global structure, in which developing countries are coming to define the nature of the world more and more. If you’re interested in the world, this book is worth a look!