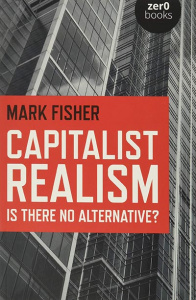 By Mark Fisher
Review by Alex (History and German)

The best non-fiction either makes you completely re-think something you had always taken for granted or puts into words something that you have always felt instinctively but never been able to articulate.

Mark Fisher’s Capitalist Realism does both of those things. In less than a hundred pages he makes the case that it has become easier to imagine the end of the world than it is to imagine the end of capitalism. Since the fall of the Berlin Wall and the collapse of the Soviet Union, it has been more or less taken for granted that we live in a capitalist world.

Fisher argues that a lack of alternatives to this system, which he considers deeply flawed, creates a sense of cynicism and political apathy. For him, this way of organising our society affects not only our economy but our culture, private lives and mental health. The last of those is particularly impactful given Fisher’s tragic suicide in 2017. He had long argued that poor mental health, with which he personally suffered, was a political as well as a clinical issue. He makes his case not through classical literature or impenetrable political theory but rather by analysing popular culture — films like Children of Men and Wall-E — and his writing is clear and powerful.

Fisher’s work is of interest to anyone considering philosophy, politics or cultural studies such as literature and film. But the liberating way in which he makes us reconsider the simplest things around us is applicable to anyone interested in the world and how we might go about changing it.