A Brief History of Time 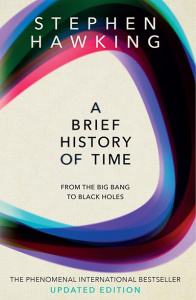 A Brief History of Time is an introduction to cosmology aimed at the layman and addresses fundamental questions such as “How did the world come to be?” and “Will it come to an end?”. The book uses minimal technical jargon and mathematical knowledge to explain how the notions of gravity, relativity, black holes have developed over the twentieth century. The book was addictive despite being a slightly difficult read as, once you understand an idea, you want to understand how it relates to other topics of the book.

Hawking has a quirky sense of humour and along with ideas being developed also shares various life events of scientists. Albert Einstein and the theory of general relativity was the highlight of the book. He explains a rather mathematical and theoretical idea with various illustrations and relatable examples. For example, he describes the notion of gravity and relativity in the following way: Imagine a thin mattress which is held outstretched. Place a heavy ball on the mat so that map dips around it. Now if you put a few marbles on the mattress they move towards the ball, or rather gravitate towards it. This idea of gravity was adopted to explain the orbit of mercury which deviated from Newton’s laws.

The book also explains ideas of how time stops near black holes, why objects can’t travel faster than the speed of light, how black holes aren’t so black after all and also the science-fiction ideas of wormholes and time travel. He takes all these different ideas and in conclusion talks about how unification of forces is the ultimate aim of Physics, supporting this claim by drawing from the specific examples discussed above. It’s a book which explains scientifically essential questions asked by humanity since the beginning of time. It generates a childlike wonder towards the grandness of the universe.

I would recommend this book due to its logical approach to highly advanced ideas in Physics. You can understand the concepts discussed without any prerequisites. It’s a very satisfying read, and gives one the illusion of understanding the very mechanics of the whole universe.

This book, as you might expect is an excellent, yet brief, history of time. It explores the phenomenon that is our universe, and the laws that govern it. With this comes the rich history of the physicists who have laid the groundwork for what we believe today. This includes their most brilliant work and that which we now consider to be complete nonsense. Better still, it can be read by anyone, that’s the beauty of it.

The ideas discussed are so thought-provoking that anyone with the slightest interest in physics and the puzzling nature of our universe is sure to enjoy it. There is no complicated maths and every point is explained simply and clearly. That doesn’t necessarily mean that every point will be fully digested by all readers because the concepts are confusing and often counterintuitive, but that’s okay. Even if not understood in its entirety, it will surely fascinate, amaze and inspire.

This is not a book that will prepare you for studying physics. It will, however, convince you why to do it at all. The ideas are genuinely exciting, ranging from where it all started and will end, to travelling through time and space.

I first picked this up around the time of GCSEs and I must admit it was a little heavy, especially for someone who hated to read, but after a year or two I gave it another go. This time it really started to sink in. The content was nothing like what I’d been introduced to in classes and it was almost like science fiction, but it was real. It was ideas like these that persuaded me to go into physics rather than anything else.

I would definitely recommend it to anyone considering taking physics further or to those just interested in the universe we all share.