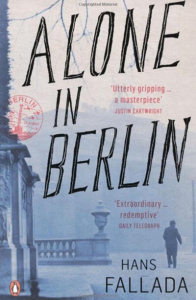 The memory is still vivid to me; on a train down from Manchester to London, my 15-year-old self clasping Alone in Berlin by Hans Fallada tightly in hand before beginning to tentatively flick through the pages.  As a current PPE student here at Oxford, you probably wouldn’t expect me to recommend a novel about the small protests of an ageing German couple against the Nazi regime but, the simple fact is that reading Alone in Berlin was the site of my political awakening and has informed my activism ever since. Essentially, the book surrounds the small acts of resistance perpetrated by Otto and Anna Quangel in opposition to Nazi tyranny in the aftermath of the death of their son (characters based on actual members of the anti-Nazi resistance, Otto and Elise Hempel). They bravely leave postcards with anti-fascist messages on them all over Berlin as Inspector Escherich of the Gestapo frantically fails to reveal these unlikely towers of resistance.

Now, you may be curious as to how this book led 15-year old me to get involved in politics (both through activism and academically). The answer is that Alone in Berlin is a stunning demonstration of how protest and political activity need not be about grand gestures, rallies and mass mobilisation but that political activity at its most powerful comes from an authentic place (in this case, the pure emotional pain the Quangels faced after the death of their son) and is conveyed through small acts of bravery and defiance.

Even now, looking at my reading list where I’m studying post-colonialism and empire, in academic books such as Insurgent Empire: Anticolonial Resistance and British Dissent by Priyamvada Gopal; I am constantly reminded of how I first came to think about acts of resistance of this kind through reading Alone in Berlin. And for that reason, there probably isn’t a book I could recommend more; it’s not a book I wrote about in my personal statement but it definitely made me a better PPE student and, more importantly, a better activist.

Try checking the availability of this book at your school or local library or explore second hand bookshops and websites. You may also wish to purchase from Amazon or Blackwell’s.