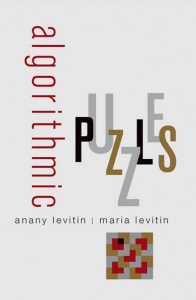 Like many people, the thought of studying Computer Science at university did not really occur to me for a long time. Because it is rarely taught at A Level, it is easy to overlook in favour of more “traditional” subjects that you already feel comfortable with. In fact, it was at an open day at Oxford that I first considered it and realised it might be the perfect extension to my long-standing love of Maths. Over the summer, I began to teach myself some programming (useful for anyone considering Computer Science, but not essential: there are plenty of people here in Oxford who had never written any code before starting their degree), but then I wanted to read more about the subject before I decided whether it was what I wanted to apply for, and I needed something which required no prior knowledge of Computer Science. That’s where Algorithmic Puzzles comes in: it can be enjoyed by anyone who likes puzzles and problem solving, but it also delves into fundamental Computer Science topics, in a light, easily understandable way.

The book presents a highly varied series of puzzles, complete with hints, solutions and methods for how to solve them. It also encourages you to think about how you might find a general method (or “algorithm”) for solving similar problems. The solutions often showcase strategies which are useful for solving other puzzles, as well as real-world problems. In fact, through this book I learnt about many concepts – like invariants, binary numbers, and divide-and-conquer algorithms – which turned up again and again in my degree, and make up the foundations of Computer Science. One of the puzzles even ended up being very similar to a question in my Oxford interview.

A lot of people don’t really know what makes up a Computer Science degree: “Does it involve coding?” they ask (yes, but not as much as you might think), “Is it anything like IT?” (no! Honestly, not at all, thank God). The truth is that Computer Science is about logic, and finding innovative and efficient solutions to problems. Algorithmic Puzzles is the perfect way to test these skills, and find out whether you have the brain of a computer scientist.

Try checking the availability of this book at your school or local library or explore second hand bookshops and websites. You may also wish to purchase from either  Amazon or Blackwell’s.