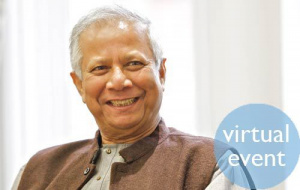 An event to celebrate 100 Years of PPE at Oxford and to launch the jointly endowed Centenary Visiting Professorship of Philosophy, Politics and Economics

Queen’s and University Colleges are delighted to invite you to a virtual conversation with Professor Muhammad Yunus, 2006 Nobel Peace Prize winner, social enterprise entrepreneur and acclaimed “Banker to the Poor.”

The Colleges will be hosting this virtual event to celebrate the 100th anniversary of the creation of the PPE degree in Oxford and to formally launch the newly and jointly endowed Centenary Visiting Professor of Philosophy, Politics and Economics.

The conversation with Professor Yunus will be co-hosted by Dr Claire Craig, Provost of The Queen’s College, and Baroness Valerie Amos, Master of University College.

Nobel Peace Laureate Professor Muhammad Yunus
Nobel Laureate Professor Muhammad Yunus is the founder of Grameen Bank, pioneering the concepts of microcredit and social business, founding more than 50 Social Business
companies in Bangladesh. For his constant innovation and enterprise, Fortune Magazine named Professor Yunus in March 2012 as “one of the greatest entrepreneurs of our time.”
At the Opening Ceremony of the Olympic Games Tokyo 2020 Professor Yunus was conferred with the Olympic Laurel award for his extensive work in sports for development, bringing the concept of social business to the sports world.

Professor Muhammad Yunus is the recipient of 63 honorary degrees from universities across 26 countries. He has received 143 awards from 33 countries including state honours from
10 countries. He is one of only seven individuals to have received the Nobel Peace Prize, the United States Presidential Medal of Freedom and the United States Congressional Gold
Medal. He has appeared on the cover of Time magazine, Newsweek and Forbes Magazine.

Professor Yunus has been stressing the need for a basic decision of “No Going Back” to the old ways of thinking and doing. He proposes to create new roads to go to a new destination
by creating a World of 3 Zeros – zero net carbon emission, zero wealth concentration for ending poverty once for all, and zero unemployment by unleashing entrepreneurship in
everyone.

His recent focuses are:

a.
Professor Yunus has been campaigning for making the Covid-19 Vaccine as a Global Common Good since June, 2020, urging the World Trade Organization to place a temporary waiver on Intellectual Property rights on vaccines to free up the global capacity to produce vaccines at all locations around the world.

b.
Professor Yunus has launched a programme of creating a network of 3ZERO Clubs, each club to be formed by five young people. The programme aims to engage the global youth in initiating actions for creating solutions for global problems.